This week we saw two films. Well two and a bit as we gave up after a bit on the last one. That was more because one of the group had to make his excuses and leave. We’ll let you know what we thought of that film sometime in the future when we get around to watching it in its entirety.

On to the reviews then.

We actually reviewed this professionally as the film is coming out on February 8, 2016. You can catch the full review over here.

Masters of the Universe 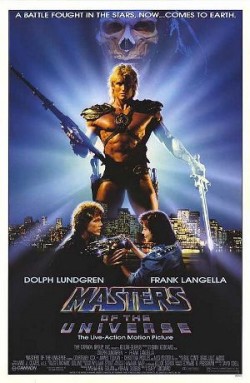 What can one say about such a classic? Well, it is terrible even for a cartoon crossover film. I know I’ve had to suffer some of The Garbage Pail Kids before we gave up on it for its awfulness. This one is in the same ballpark but it just kept us sucked in.

It stars a very young looking Courtney Cox and Dolph Lundgren as He-Man. A person who seems to be running around the middle of home-town America wearing some sort of bizarre fetish gear. This is the sort of town that seems to be happy to see strange creatures appear without batting an eyelid.

Apart from that, the cast is excellent but what lets it down is the batshit bonkers script. It just jumps around and it even has it’s own “Scrappy doo” character.

You do have a feel of sorry for the people who were in the film. They do look like they are just there because they have to be. It doesn’t have a soul to drag you in and want to believe in the characters. In this case, all we have is a mess of a film from a cartoon series that was only created to actually sell toys.

Not only that, we had a huge discussion about what colour Skeletor’s skin is. The link will show you what we mean. Is his skin blue with a skull for a head or is he all that skull coloured and the blue is a “morphsuit“?