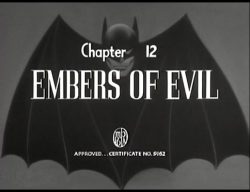 At the end of the last episode we saw The Batman, and his trusty sidekick Robin about to be blown to kingdom come when the shack he was in exploded.  That was what we thought was about to happen.

How did he survive?  Quite easily, they went down the semi-obvious trapdoor after playing possum for a while as the bomb was being set.  Is this another body to add to the growing Batman body count.

Scaring poor Alfred with an exploding model, our heroic duo appears just outside the compound ( what was SEction 50 ) with a stupid quip from Robin “Glad we missed that” and ignoring the poor goon that was killed in their place.  So a quick return to the car, change & off back into Gotham for a nice rest and crumpets.  On the other hand, our evil Jap is celebrating the death of Chuck White and The Batman franchise for Gotham City.

We do meet our Mechanical men again, briefly, as our evil villain goes to talk to a man about a murder.  That of our stool pigeon, Marshall, who needs to be stopped form singing even more.  It’s a bit confusing as they thought he was killed a couple of episodes ago when a mine exploded.

With our back story complete, the big bombshell is that he was very friendly with old Chuck White.  Now this is defiantly a cause of concern.  That involves giving him a special brand of cigarettes.  The sort that are very bad for your health!

Next day our heroes bump into the henchman, Bernie from the Sphinx Club, just leaving the police station after giving Marshall his smokes.  What could happen next.  So after some more back story, the thing that we saw a couple of episodes ago so the viewers can have a catch-up, they three are leaving the office when, dum dum dummm, an office stops them with news about Marshall.  He has passed out in his cell.  When they find him, the news isn’t good as he has suffered a heart attack and is now dead.  All but a small clue, a cigarette butt.

Off to the Bat laboratory to see what could be in the innocuous butt. Adding something that has been spinning in an incredibly dangerous centrifuge to the butt, we discover it has been poisoned!!!  Well it contained a poison.  We don’t know which one but it is, at least, one of the 1,000s out there!

Luckily they are calling the Captain just as he is about to start smoking the evidence, sorry cigarettes, that was in the cell.  The Batman then tells him that the cigarettes contain a deadly poison.  Still this is unknown to us all but it does seem to be deadly!  That as well as giving who the murderer is.  With a stupid double take our Captain realises that the evidence is was about to smoke could have killed him.

Back at the evil Japs lair, we discover that he has the coroner‘s report that says that Marshll died suddenly in his cell from something.  Now they have to find out if The Batman has been killed or there are more in the queue.  They then hatch a plot to capture our plucky, but dim, girlfriend of Bruce Wayne, Linda Page.  This is a bit of a convoluted plot but it ends up with here at an abandoned warehouse [the Ajax Metal Works ] using one of the brainwashed, her Uncle Martin, to lure her there.

Quick as a flash, her boyfriend is now at the works.  That and a goon at the gates giving him the run-around.  After a quick change into The Batman & Robin, they then plan how to get her out and then the end of episode fight.

This one involves  smoke flare and then the next couple of minutes of fighting.  The fight is as good as the rest of them.  But there is a fire in a tinder-dry place.  This ends up having the police called and then it ends up with some stock footage of multiple tenders on their way.  At least the goons have got Linda out before the building collapses on the hapless Batman.

How will he get out in time before being roasted alive.  All will be revealed in the next episode.