This weeks viewing report will be short and sweet.  Mainly because we weren’t paying that much attention to the films being shown and secondly, they were just blatant rip-offs of much better films. 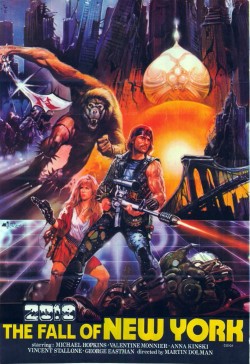 Where can we go with this one? Well, it;s just a blatant rip-off of Escape from New York. That but add Children of Men into the mix and you get the wonderfully camp but totally forgettable After the Fall of New York.

We had completely lost the plot after about 10 minutes into the film.  It was that gripping.  The tension and keeping us on the edge of our seats whilst the film plodded onwards totally failed.  It did have a couple of moments.  Riding through Monument Valley on a great looking trike and some of the backgrounds were nice.  The models at the start were about 2 inches high with a Statue of Liberty that may have come from a Thrift Store for about 20 cents.

The major thing that we were struck with the film is the amazing work that hairdressers do in times of post nuclear holocaust.  That and 2019 seems to be the era of the rise of the second wave of New Romantics and 70s punk.

Before I wrap up by saying that it’s not a bad film. Then again it’s not a good one as well. It just doesn’t drag you into the action. It just plods on doing what Snake Plissken would do if he had to rescure the last fertile female on earth. Also I have to praise the music composer, Oliver Onions [ Guido & Maurizio De Angelis ], who kept us in tears of laughter from some of his music queues. 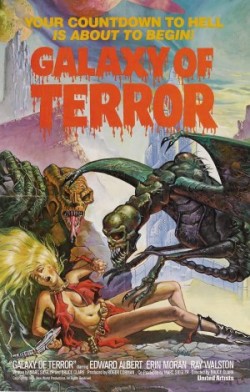 Take Alien. Add Roger Corman & James Cammeron to the plot and you get an amazing Alien rip-off. Not only that we have a sex scene that involves one of the alien worms and a crew member! Apart from that sequence, the whole of the rest of the film is forgettable the second after you see it on screen.

The good points are the sets. For a Roger Corman film it has a huge budget of $1.8 million. It does show in the sets. They are quite amazing. We also have a very young Robert Englund before he played one of Horror’s most iconic characters. We also have Erin Moran ( Joanie Cunningham from Happy Days ) in it as well.