Sundown – The Vampire in Retreat 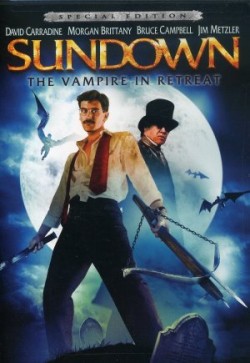 What do you get if you mix Bruce Cambell & David Carradine together in a film. If you throw in a town of vampires. Add a small mix of factor 10,000 sun screen then you may have thought of this film.

An amazing ramble through the mid-west of America – a tiny, tiny part of it at least. Add a vampire tribute act to ZZ Top as well as quite a good decapitation screen and a rubber head that made us go “that’s quite cool”! I think that could be a first for Bad Movie Towers!

Most of the time the Vampires run the standard tropes that you come to expect with being a member of the undead.  Sunlight, mirrors and such like.  Sometimes the mirror thing isn’t as invisible as the vampire should be!

Then comes the town of Sunrise.  A nice town.  Well it is if you’re a member of the undead with enough sunscreen on.  That and follow the orders of the Puritan Pastor and you should be happily undead for a long time.

the main problem with this film was when we got into town it went so strange we lost intrest in the film as a whole as the ZZ Top tribute was great.  That and the horribly horrid late 80s synth soundtrack.  The other good thing is that we see Bruce getting turned into a vampire and you have to drink your pseudo-plasma via a two headed straw

We do know that it doesn’t end well for the town and people but for the love of me it was lost in the mush of the fire fight at the end. 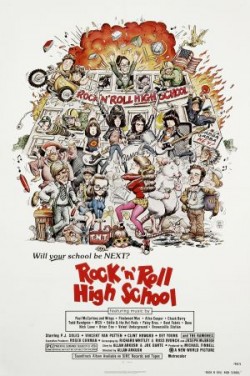 Now I’ve harboured rather ambiguous views about the infamous Ramones’ movie vehicle ‘Rock n’ Roll High School’ for many years and many reasons. Firstly let’s go back to a time when the Ramones logo did not grace everything from Topshop/Primark glittery skinny fit ladies vests, mug coasters, faux leather wallets and even converse pump styled trainers admittedly such a time might be hard to imagine. Back in those dark days prior to the rampant commercialism of the vague concept of ‘coolness’ and prior to the internet where most of our information about bands came from inky badly proofed zines and of course the actual albums to say nothing of speaking to people who had seen the band I had first learned of the movie and became eager to see it seeing as it featured one of my favourite bands. Sadly I had to wait a long time to do so as although it had been briefly released on VHS back in the 1980 those copies that had made it to the UK were rarer than hen’s teeth. Since the film is mentioned in a few band bios of the Ramones and the band themselves were never fans of it (preferring their soundtrack work on the later Pet Cemetery) it made me want to see it even more. Sometime after Joey died there was the inevitable cash in rush and lo and behold Rock N’ Roll High School was re-issued. I watched it. I watched it again. I felt indifferent to it and promptly ‘lost’ the disc pretending that I had never seen it.

That was many years ago so I was due retrospective of it so duly took a copy along to the film night. Firstly I’m struck by how much it reminds me of a cash in on all those National Lampoon’s styled movies particularly Animal House and other John Landis comedies but with its corny outdated jive-speak making it seem more like American Graffiti and the 1950s than nearly the 1980s I had the sneaky suspicion that the Fonz would show up at any moment. I’ve never liked this film, sure it has its moments but it never felt like a good fit for the Ramones being so far removed from the sleazy New Yooork streets and grit they were associated with and instead transported into the bright warm sunshine of healthy bronzed teen populated California where the skin of Joey becomes almost translucent under the white light and coupled with his 7’ lanky frame making him seem like an astral projection of himself – almost flickering between the planes of reality if looked at for too long.

Riff Randell is as annoying as ever and the most unlikely fan of punk rock or the Ramones you could ever hope to find, the rest of the clichéd High Schoolers are just as ‘lame’ from the nerds to the jocks and the only sane people are the ‘Squares’ frankly who have the right idea in my book. The Ramones being in the film is unwieldy, seems misjudged although their brand of 1960s Garage Rock and Bubble-gum Power Pop fits the overall nostalgic feel of the whole. It transpires that apparently Cheap Trick had been intended as the band for the film but had dropped out meaning a replacement had to be found in a hurry which probably explains the lack of real ‘Quincey Punks’ or anything too readily identifiable as ‘Punk’ (such as it was then) here since the script was hastily altered to crowbar the leather jacketed bowl hair cut Godfathers of Punk Rock into it.

All in all though far more entertaining than I first remembered it being and a bit of a hoot to watch with friends.

Thanks to Drew Ellis for that one 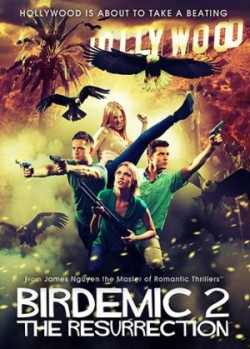 The first thing that strikes you about the sequel is the lack of control of the sound. A lot of the time you’re just hearing car noise and someone saying what they have been asked to do. No acting could be determined at some points throughout the film…

Some good news, it’s short. Under 90 minutes. It would have been a lot shorter if they cut out the pointless, start that reminds me of The Verve & Bittersweet symphony. That one had more of a meaning! Yes, it gets us through the credits but can’t we just jump in and see who was in it at the end and not everyone who had a line? Not only that. Something to spot is copyright. Look into the background and notice the strange happenings there… The problems of trying to make a film with $5. The start does feel like a puff piece for Hollywood!

Now onto the plot. Let;s meet in a restaurant that only has the cast as employees patrons. The acting is as good as the first. The sound quality is quite painful. Cliché’s are still going – we have a waitress in Hollywood who is an actress. Luckly she meets a director for a film who asks her to try out for the part. If it’s as good as this is then the film will be amazing!

We hae a horrid filing piece here for set-up. Pitching for money – only $1 million. Setting the scene for who will be together. The “Money man”‘s girlfriend as one of the part. And as this section ends we have all of the money needed to make the movie, Sunset Dreams. After that we have a “love montage” of two of the cast wandering around California for no reason apart from it fills time – including everybody in the background having their faces fuzzed out!

Isn’t this film meant to havve birds that attack not a CGI jellyfish attacking someone’s legs that make you turn red.  A 911 call was made and I’m sure the dispatcher is just talking off camera.  Not only that, they can’t even afford to hire an ambulance so they use some strange CGI one pasted onto the screen.

Now with some more plot and showing vultures and birds so we know what’s going to be happening in acct 3.

Caveman sex and death by CGI birds has randomly appeared!

Apart from totally not caring about anyone and the raft of filler talking, music or just randomly driving somewhere I have now lost the whole film.  It’s nowhere hear as good as the first.

With blood rain and birds coming back from the depths of the tar pits, something strange happens.  Welcome to act 3 and the hope of a better film.  With all of this going one I would expect some people to react more than randomly waling around the frame.  Now all we see is people randomly fending off the birds and things.  My life needs to be ended as this film feels that it won’t

The whole film is just plods along with the director hoping that you remember the original.  It’s just a sloppy rehash of the first one for people who wanted this movie to be made.  Nothing more or less.  The director hasn’t learnt anything in the years since the first one was made.  The actors on teh other hand seem to have gone backwards with their craft.  Still reading from cue-cards and screening badly!