Attack of the Werewolves: (aka: Lobos de Arga) 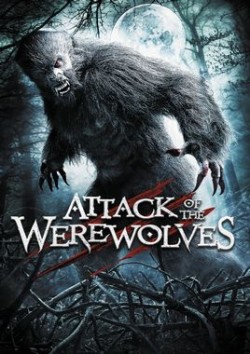 It would appear that autonomous region of Spain which is Galicia is their equivalent to the wild and foreboding far western or northern regions of England like Cornwall/Devon, Yorkshire full of damp looking hills, creepy wooded areas and rustic inbred looking yokels and as such is ideal place to set a comedy horror movie about a modern day cabal of werewolves in.

Frankly any foreboding I had about sharing this movie with my fellow Bad Movie Night posse was rewarded but for all the wrong (or maybe right?) reasons as this film is far from being bad. It had me lamenting that the last British comedy ‘Horror’ movie I’d seen was the truly terrible ‘Lesbian Vampire Killers’ and ‘I Sell The Dead’ both of which leave you feeling as though you’ve betrayed some inner core principals by sitting through them. Thankfully I have yet to steep to the level of ‘Strippers Vs Werewolves’ but if I do I think I’ll have to have myself committed somewhere secure as it would be a sure sign I was having a mental collapse. As for Attack of the Werewolves it was actually really entertaining, the humour translated well and yes it might have been a tad slapstick and farce heavy but that probably helped in its crossover in translation. Frankly far better than many British offerings in a similar vein and I’d even say it was even more entertaining than the rather turgid Dog Soldiers whose continued cult status confused and annoys me in equal measure.

Okay, the special effects are ‘old school’ little CGI usage (none that I could recall) good old fashioned creature feature make up and hairy ape werewolf suits which all works as part of the hoaky fun. The plot actually makes sense which is rare for any horror movie, the acting is very good and action is well directed and executed and the jokes are chuckle inducing. As for the ‘bad’ well, we could have done without the seemingly tagged on introduction to the backstory which looks like it has been lifted from some bad comic and only put into the start of the film to allow the filmmakers to have a sex scene (even if it’s a drawn one) in the movie, it’s a pointless bit of extension on the run time as the backstory is constantly explained through the film by various characters. I feel as though I’ve cheated the rules of this site as in my humble opinion this film is not a ‘Bad Movie’ but it is light hearted and shock horror “foreign”! so the subtitles alone might be enough for some to classify it as such. There are even a few scenes in the film which had us squirming in our seats with slight disgust involving chopping boards and fingers. I can’t help think purchasing this DVD was a sound investment for my £1.99.