There was actually a 4th film watched but I’m not going to comment on it as mainly I can’t remember much about it apart from Lemmy, and Ron Jeremy, were the best known stars of it. That film being the 4th in the The Toxic Avenger series. Citizen Toxie

The Lost Skeleton of Cadavra 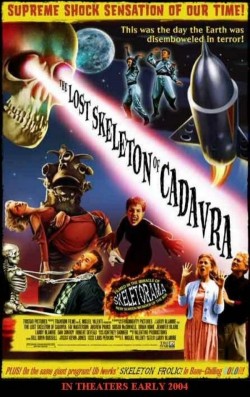 The first film of the night was meant to be a parody of the great 50s B-movie sci-fi films that we all love. It does that. It parodies all the clichés that you are used to seeing in a film of that era. That’s where the main problem with the film lies. It tries too hard to be in that genre. It’s too polished for what they are trying to do.

We can see what it tries to do. It would have worked better if the script wasn’t as lose, the acting more of the era and not a parody of what the cast think it should be like.

It also includes all the sterotypical characters you would expect in this sort of film.  A park ranger who doesn’t make it to the end credits – we need someonw to show us how the monster works.  Rubber suited monster and leotard dressed possessed aliens.  Not only that, we have a scientist that “does science“.  What sort isn’t rearly answered apart from “science“!

It didn’t grab us because of how it was made more than the film itself.  It tried to be a Plan 9 but ended up more like Waterworld.  A mess that could have work wonderfully but falls flat in all aspects.

If you love the old cheap 50s sci-fi then avoid this film like the plague.  Otherwise if you do watch it I do apologise as it just doesn’t work in all areas. 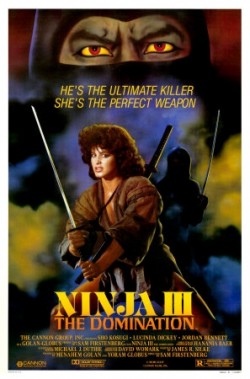 The first of two ninja films that were enjoyed.  This one involved the worst ninja that the world of Japan can give you.  Obvious, useless trying to be sneaky and randomly killing anything that gets in their way for no reason apart form she can!

The sword as you can see in the poster isn’t as great on film.  It’s made up of bits of pipe and, what looks like, a square from a camping mat for a hilt.  Not only that it hovers and produces a golden glow when summoned!  Not only that, she lives in the most 80s apartment you can ever think of.  Her, framed, poster on an easel is creepy but even more so when the eyes start to flash in time with evil possession occurs.

The only way to remove the curse involves a load of cut-and-paste scripting and editing to get us to the grand finale.  Something happens and we all live happily ever after.  The bud guys are dead, our heroine is un-cursed and there probably is a love interest thrown in for a moment. 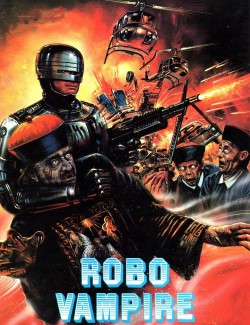 The first thing you can see in the poster that Robocop is off hunting vampires.  Well, it does involve a robot.  More as a cyborg as our known Robocop is.  It’s a bad rip-off of the well know hero.

This is another cut-and-shunt sort of school of film making.  Who would think that a machine gun, silver sprayed, robo-cop and vampires would work together as well.

The y do.  Especially as they are of the eastern school of vampires.  The ones that hop with their hands help out.  The only way to stop them is using some words scribbled on a yellow post-it-note and slap in onto their forehead.  Bullets don’t tend to work well on the un-dead.  This is one that forgets about mythology and just applies American values to any situation.

I have no idea what languages were spoken in the film as the version we saw was dubbed.  Badly at that – another charming aspect of the film.  That and the cross between a batsman at the crease and a Samurai that becomes our hero after they have to cyborg him.

I have no idea how the film ends.  I have a feeling that it just runs out of ideas and stops.  Either that or the ending of both of ninja films have started to merge into one.  That can happen after a while of watching this sort of films.