We were looking forward to this weeks selection.  Being a strange Japanese film that involves the undead and baseball.  One about a Cop who is also a Samurai and the final one.  Well, Girls in small bikinis running around Hawaii trying to solve a crime. 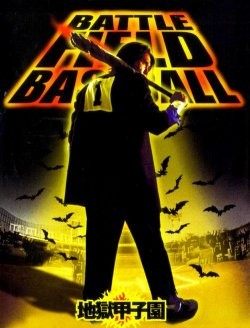 We thought this was going to be one of the strange hidden gems of Japanese cinema.  How wrong we were.  It’s a horrible mess of a film.

Basically it’s about a school team that plays baseball.  Fine so fat?  The twist is that it’s played “to the death!“.  Two teams enter.  Only one leaves alive!

What seems to be the plot of the film is this – One pupil who has just been transferred to the school has played baseball in the past.  Due to an accident that happens ( and we see as a flashback ) he has sworn never to play the game again in case the same happens to other people.

It does have it’s moments when the team is formed.  This is where it goes a bit Shaolin Soccer on us.  We discover why he has sworn never to place Baseball again.  He managed to kill his father with an extreme speed pitch.  Some old team members who everyone thought were dead come back.  Eve the evil mother appears to help get a full team together.

The best piece of this is seeing into one of our character’s chest cavity to see either a clockwork contraption that’s meant to be keeping him alive or a beating, love, heart.  True love overcomes!

Finally the evil team is destroyed on the battlefield but not ultimately killed.  We do have a happy ending when the coach of the zombie, evil, team is saved from death and everyone goes off into the sunset happy. 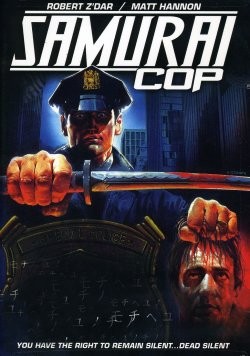 Possibly the worst of the lot.  Not only do we get bad dialogue, bad acting we also get a bad wig!  It’s blindly obvious as it looks noting like his real long hair.

The film is from 1991 but what the female members of the cast are wearing seems to be a good couple of years younger.  Not only that, what our hero is wearing at one point is almost as amazing as his lover’s.  She’s not wearing much more than he is and she’s wearing a thong bikini!

There is bloodshed, limb removal using a Japanese sword – this is normally called a katana but what would a samurai know!

He keeps having to reminded that is job isn’t to randomly kill people who get in is way.  That and a partner who seems to have a rubber face when he needs to emote shock, curiosity or any more of the two emotions that he seems to be able to do.

Shooting and chopping off limbs our intrepid duo finally gets hold of the Mafia boss.  It does have pieces that reminds you of the unprecedented The Room.  By this time I was losing the will to live and we had another one to get through.

It was fun.  Lots of rubber limbs and dreadful acting.  Saying that it did make no impact on any of the people watching the film.  it was good news when it finally finished! 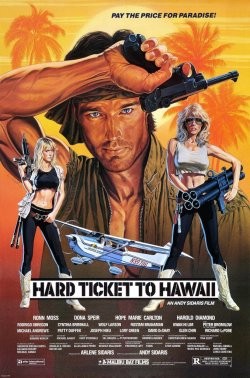 What does a toxic snake, A drug king-pin, female pilots in tight shorts and bikini tops have in common?  Apart from this film, nothing it seems!

This was another disappointing film.  It didn’t live up to the information from its IMDB page.

The plot gets a bit convoluted.  It can be boiled down to a couple of things

As always with film of this type, and as it was made in the late 1980s, we know what to expect.  Not a lot actually but it does have it’s moments.  A scene with a Frisbee is quite amazing.  I never knew you could do that to a rubber body with one!  Not only that, it seems that people in Hawaii also fill their sex dolls with hydrogen as they float an explode when a rocket is fired at them.  A launcher that can fire different sized charges but always seems to come from the same launch tube.  Not only that we do see some naked ladies and painfully comic acting.

Another totally unremarkable and forgettable B-movie from the 80s.

It was going to be a great night and all we ended up with was three totally forgettable films.  I’m struggling to write this even if it’s not been 12 hours since we saw them all!