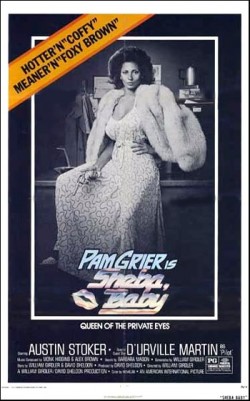 What can I say about Sheba?  She’s a foxy chick that likes to get into trouble.  That and the amount of times she changes her clothes.  It seems to be every scene she is in something different.  This does change later on in the film where we see her just in a tight, unzipped, wetsuit!

This is Blaxploitation at it’s best. The music is soo “Funkadelic” and is an amazing way of getting the start of the movie going. It does tend to get a bit annoying later on as there is only soo much you can put up wit a baseline like that.

The plot seems to be about a savings and loans company that is being roughed over by some gangsters.  Shooting the place up with Tommy Guns and M-16s as they are trying to drive her father out of business.  However, it does seem to a film with a slow burn.  Right up to the time where her car spontaneously explodes in a huge fireball.  This is the impetus that Sheba needs to turn the tables on The Mob.

We did lose the plot around this time as we were talking to each other.  Still we were entralled with what Pan Grier would be wearing in the next scene.  Not only that, we get introduced to Walker, a loan shark, who is wearing the most pimpish coat you could possibly dream about.  It is quite amazing.

This is where the guns come out and Sheba’s vendetta starts.

At one point she needs to get onto the Mob’s boat.  This involves using a jetski – We know it’s a jetski as it says it on the front in big, unmissable, letters.

It’s not a well written film.  Some of the acting is dreadful but that doesn’t take away from the enjoyment of the film.  Pam Grier is the best of the bunch even if sometimes we are distracted by her hat, shoes or whatever else she is wearing at the start.  Her fashions, today, can take you away from the action or dialogue as you are in amazement of what people wore in that era.