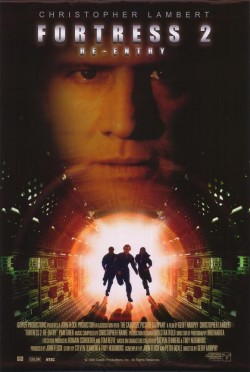 This is the sequel to the imaginary named Fortress.  That also starred Christopher Lambert.

This one takes off from where, presumingly, the last one left us.  That and a bit of a delay as he’s been on the run for 10 years!  That did spoil the film a bit as I had no idea of the back story and the bad blood between some of the characters.  That and the back story explanation on why he is in a cabin in the middle of nowhere.  That and why he is with a gang of other people.  Yep, all will soon be in the Fortress in space.  That and the budget Linda Hamilton, Joan Chen, and other such stereotypes that were around in the late 90s.  At least in this future they do have flat screen monitors that a lot of films set in the future didn’t have.

The opening sequence see our hero, ad his gang, perused by someone in helicopters that they blow up using missiles until our hero gets his vehicle crippled and himself captured.  Along the way, his wife and son escape from their grasp.

The next thing we know is our hero is waking up strapped to a chair in his underwear being processed for some reason.  Probably because of him being a prisoner.  That and tagged with an implant that does stuff to him.  That out of the way he can then be let loose with the rest of the prisoners to start the scheme to get everyone out and the end of the evil corporation that was hunting him down.

This is where we also get introduced to Pan Grier.  Someone who we last saw in Sheba Baby but still on the crest of the wave after her resurgence in Jackie Brown of a couple of years previously.  However she does look a good many years older than she should since that film.  Not only that, we also discover that the evil corporation, MEN-TEL still uses windows 95 for their communicational needs!  This is the major drag of the film.  SEtting the characters up.  It does seem to help if you have seen the original from 1992 as we were lost in places!

Now we see the prison accommodations.  Totally mixed and the food looks like they have god runny Angel Delight.  Dayglow colours and they try and act that it’s as disgusting as it looks.  With that, we also see what hte implants do.  It subdues the prisoners by messing with their brain.  We also now see another, possible, plot element.  Prisoner control vis light beams and a computer voice!

This is also the time we see how evil the baddie is by throwing someone out into space for no reason apart from Evil!  This is the first time we also see the space station.  It looks like they have used the same computers as they did for Babylon 5.  It is the early days of CGI but they could have done a much better job with a reasonably sized model!

This then leads us to the best sequence of the entire film.  The wake up exercise video that we see.  We had to rewind it a couple of times so we could get all the laughter that it caused off our chests.

now it gets a bit dull and drags.  There are a couple of moments that should have been handled better.  A spell in “The Hole” so he can be taught a lesson after an escape attempt.  That and we discover that the showers as also mixed!

Act two seems to boil down to the following:

Act 3 can then be summed up quicker as:

Overall, the film was OK.  It didn’t grab you as it should have done.  There are some moments but they are mainly down to the era of when the film was made.  The late 90s wasn’t good on fashions.  That and the direction, and sometimes idiotic editing selections, do ruin it for you.  If it had more action and a better coherent plot then it would rise above mediocrity that is launders in.  That and the temperatures of the set looks dreadful.  You can see the breath of most of the actors when they speak.  That and having to wear costumes that are not designed for the cold! 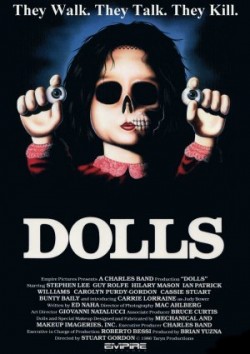 From the director who gave us the first Fortress film, I give you Dolls.

This is a short film anyway at 74 minutes.  This makes it even shorter when the opening credits run for, what it seems like, 10 of those minutes – It’s actually only 2½ minutes but it does seem a lot longer than that!

We have a set of characters that are quite common for the era:

As you could guess, the ones that you thought would die do.  Mostly in quite a horrific way.  That’s what I think they are going for.  Sometimes when you are being bludgeoned to death by dolls wielding knives, scissors and other sharp objects.

There are ups and downs during the film.  Strange things like a giant teddy bear and the great punchline involving the dolls.

All in all, it is a great, enjoyable, film that keeps you both on the edge of your seat for some of the sequences but also in hysterics because of what was meant to be scary then but now just comes across as comical.  Not only that, some of the model effects are great.  Others are very much cheap Ray Harryhausen.  All in all, it is a very enjoyable film with much to say for.  It does end, as a lot of these films do, in a way that is open for a sequel.  Unfortunately, this never materialised.