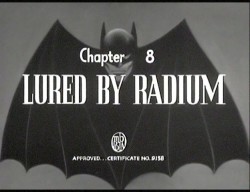 Last time we left The Batman unconscious in a lift shaft with it hurtling towards him to crush him to death.  Now how will he survive this perilous outcome.

We must point out that no Batmen were harmed by a very rubbery looking one was used to throw over the lift shaft.  This may just be a super-power that we didn’t know that The Batman had at the time!

After the recap, we discover that the easiest way of getting away from being crushed is just by turning off the power – One use of having a sidekick!  When The Batman, and Robin, finally get together after he was saved they just run away.  This could be strange for a US Government agent!

Back at Wayne Manor, we find Linda & Alfred talking about her “Uncle Martin”.  With a quick change of wording she is taken off track.  That and she berates Bruce for his lazyness!  Then it ends up as a road trip to Uncle Martin’s cabin.

Uncle Martin is still being tortured, or converted into a Zombie if he doesn’t tell them.  At least our evil Jap remembers to put on his gloves before he starts the brain torture.  With a quick brain zap he has all the information that he needs to steal the radium from the mine.

However, on the way, their car overheats and has to stop at a gas station in the middle of nowhere.  This then starts a nother bit of racism.  The station owner is a American Indian.  He is called by the driver “Sitting Bull”.  However, he does get his own back on the stupid goon by answering his question perfectly.  The question was “Does he have any water”.  The reply – “Oh plenty.  Bucket, Water”.  With that he goes back to reading his book, smoking his peace pipe or whatever culturally clichéd things that Indians did back in the 1940s.  After a quick top up of the water, and a quick shot of Uncle Martin in the car under guard, we are off to the mine!

We get a boring driving montage with instructions being given.  That an an aside to point out Uncle Martin’s cabin.  I wonder if this may be used later on in this episode?  We also discover what the best thing to wear down a radium mine.  Your suit, tie & don’t forget your fedora.

After splitting the party so he can show the head goon around, he manages to get away from him.  Where could he go as there is only one way into the mine!

Bruce and the gang are still here!  They stop at the same place and get some great information out of our “Sitting Bull” – Who we discover is called Steve.  That and some trinkets made from the same material that is in the cave near Colton’s cabin.  Is that the real mine or just a diversion?  We just have to remember that the Cabin is on the Right Road!  They do have a real cute, and small, trailer attached to the car.  Now they are off to the cabin to see if he’s there.

Now they just dump Alfred and Linda at the cabin so they can go off and do what masked vigilante’s, sorry Governmental agents, do.  That after a quick change just before the mine.

Back at the cabin Ken Colton appears from a trapdoor under the table that was just being set for some refreshments.  I would have been annoyed at having my food flung across the room!  That and we get a quick recap from him what he has just done.

Now he has a bit of a bee in his bonnet.  That or he has but of a psychotic edge to his character as he want’s to blow the mine up and kill all the people in there with dynamite!  He then goes and starts to set it up…

Whilst that was going on, Alfred has been captured by the goons.  The Batman and Robin have gone into the cave and have found the goons.  this leads to the fight that ends each episode and the cliffhanger.

Remember a while back that Colton set the plunger and explosives in the caves?  Well, we have had everyone in the mine fighting and one of the goons falls on the plunger and then BOOM!  How will our team survive this one?  Tune in next week to discover how!