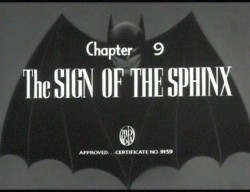 Last time we left The Batman in the mine just as it was being blown up.  We were wondering how he was going to survive that one.  the simple answer is by a fluke.  The mine explosion killed two of the Jap’s goons but everyone else was lucky to survive as The Batman needs pulling out of the rubble.

Before the explosion, we get a recap of the end of episode fight.  This time the fight in some places seems to have been sped up a touch.  There isn’t any reason for this but it seems that here and there it just speeds up.

This does close the mine down and scupper the plans for the Japs to take control and get the radium needed for their radium gun!

After capturing one of the goons & putting him in the trailer.  Bruce & Dick make it back to the cabin with a stupid excuse that Linda believes without hesitation.  It was hot so we had a nap!

Not only that we discover that Colton is now dead because of the explosion thus making the ownership of the mine a bit dubious.Our evil Jap master is getting even more annoyed as the mine is inoperable for months.  He now is threatening his goons for their ineptitude but they are sure that they have killed The Batman.

Now we see the batcave again.  We haven’t seen it in a while but there are still rubber bats flying around and it does have secret doors and telephones about.  This time we see our heroes interrogating the goon they kidnapped and are trying to get him to spill the beans on the plot.  It isn’t working so they leave him alone in the room and, strangely, he manages to get out of the rubbishy tied restraints and find a phone to call more of his goon squad.  The number was recorded and The Batman calls it to find out where they are by asking if this is a bakery but then getting back the correct location.

Now we have the perfect excuse to go under cover in disguise.  So Bruce digs out the makeup kit, a scruffy suit & hat and he is ready to go into the den of the goons.

But we are missing a name. Chuck White was selected after a sample of two.  Then we see Linda coming round and she is fooled by the disguise.  This is a person who could be confused by telling here the sky is pink at night.  She would also believe it!

After a quick drive to the Sphinx Club, Bruce, sorry Chuck, goes in and awaits the next step.  An invite to the table.  That happens, a small scuffle breaks out and Chuck pulls a gun but is easily overpowered by a man leaning through a hatch in the wall.  This is where Robin comes in.  I have no idea why as Bruce wasn’t in any trouble at that moment in time but then again… Our robin throws a stone through the window that also smashes the lightulb plunging the club into darkness.  This gives Bruce, sorry Chuck, enough time to escape and get into his batman costume.

Now we have an interesting thing.  When Robin destroyed the light it was dark but when they are chasing him after gettin gout of the club it’s bright sunlight like it was filmed at a different time of the day.

This time the Goons are shooting at Robin as well as turning things over to see of someone is hidden.  They are starting to remind me of The Ant Hill Mob.  More specifically how they ran in Wacky Races.

We do discover that we are at the docks.  This is by Robin getting onto a boat just before batman appears in a strange way.  It looks like when he jumps off the building he is going to land on his back not vertically on his feet.  Oops for the editor on that one!

This now ends up at the end of episode fight between The Batman and the goons.  How is this one going to end up?  I can tell you; The Batman being unconscious and the boat’s gangplank dropped onto his head.

How is he going to survive that one?  Stand by and wait for next week’s exciting episode.