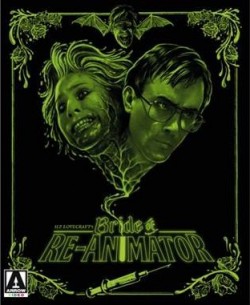 What can be said about the 2nd outing of our favourite, green goo injecting, mad scientist/doctor Dr Herbet West.

We first meet our hero, and sidekick, in the jungles of south America helping out at a mobile aid station during a nasty civil war.  This is eight months after the events of the first film.  This also gives Dr West a change to try out his re-animator juice on the just dead.  It doesn’t end up that good as he has to escape from the jungle when his position is overtaken by the “enemy”.

With that out of the way, we now move back to the scene of the first problems with his glow in the dark goo.  That being Miskatonic University Hospital where they start to get their own lives back again.  That and secretly stealing body parts from the morgue when nobody’s looking.

We also meet the separated head of West’s nemesis from the first film, Dr. Carl Hill, who has been brought back with our favourite green goo.  He’ll be upgraded later with an addition of other failed experiments!

Our two heroes.  Well, mad doctor & his sidekick are not on the best of terms as we find out in what can only be described as a lovers tiff.  One threatening with moving out but is then convinced to stay for the greater good.  All this is going on in the basement lab.  Something akin to a hipster, artisan, butcher’s shop.  Lots of dry ice bubbling about every where and bits and pieces of bodies lying around waiting to be used in the next mad experiment.  Such as making a finger puppet out of fingers and an eyeball.  This does produce a great creature and it makes it better with the great stop motion animation of the creature.  It does end up in a sticky end when it gets squashed by the vindictive police lieutenant hell bent on getting West or killing his wife.

There is also a side plot about a dying girl that our sidekick has falling in love with but can’t save her because she is terminal.  Terminal with what isn’t mentioned ( or we missed that vital bit of plot due to laughter ).

Back to our heroes.  The policeman is now after them to find evidence to arrest West for some crime.  He doesn’t mind which one but one.  This visit doesn’t end well for him.  That and the dog of our sidekick’s girlfriend who is also in the house they share.

His death is quite expected but the method is quite dull.  A small MacGuffin helps us get to the reason & method of his death.  After that, we do have the dramatic argument and re-animation of the corpse.  That goes quite well right up to the point where the un-dead policeman tries to kill West and destroy his work.  One arm lost later we get to the greatest line in the entire film.  One that we lost what was going on for the next ocuple of minutes due to the nature of the line as well as the moment.

Dan doesn’t but he goes on a rampage and tries to kill his girlfriend but does a mean act on a stuffed toy that acts the scenes a lot better than the zombie policeman.  This comes to a head after he rips a leg off the dog.  This dog then reappears a it later on with a new limb.  Well, one that he can use to shake your hand! Yup, a policeman’s limb re-purposed!

When we find out exactly what West is doing, it’s an amazing lump of latex and people hiding under the table with random limbs poking through!  They do have a body made up of various parts from various people.  Like the feet of a ballet dancer to an “untouched womb”.  They have only one thing missing.  The vital part.  This happens to land in their laps after the terminal lady dies and they steal the head!

It all moves back to our mad science lab.  This starts in the completion of the body and the injecting of the goo into her heart.  This way, as we learn, is the best way so the goo goes through the body correctly and won’t make a zombie but a more controllable thing.

This is going fine until we have a zombie breakout who are after our West.  Our mad bodyless madman who has bat wings sown into his head is controlling everything via a strange psychic link who is after revenge.

Finally we get to see our bride.  Covered in bubble wrap and something to protect her modesty, ends up falling in love with our sidekick.  This annoys her creator and his girlfriend who ends up getting into a catfight.  This ends up badly for at least one of them who starts to melt and fall apart.

With our mad flying head causing chaos, our heroic group have to escape via a secret passage to the graveyard that surrounds the house.  This could have gone better if all of his failed experiments weren’t just dumped there as well as a crumbling tomb.

We do have an ending where the correct people survive and who you wanted to die do.

The film needs you to have watched the first film so we know who is who as well as who wants our hero dead.  That and the new characters that have been added to the cast.

All in all it’s a great romp.  A great comedy horror from an original story from H.P. Lovecraft.  With some great special effects using gallons of latex & red liquid that is more akin to vimto than it is to blood is thrown about.  I’m not sure if it’s actually meant to be a comedy horror but the way it’s acted.  The style of the film and some of the creatures & effects do put it over the edge into comedy and even a parody of the series.

A highly recommended addition to anyone’s collection.  There are a couple of issues with some of the film with odd jumps of colour and quality but that can be expected from a film of this era.  Also, there is a nice easter-egg at the end of the film.  A history of how the film was cleaned up and some of the techniques used.