Not only did we watch a trilogy from the Tremors series of films, we also saw two others.  One, Murderlust, was so awful it’s already been removed from my memory.  The other being the wonderfully named Satan’s Cheerleaders 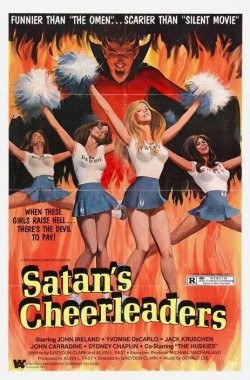 The first thing is the title is a bit misleading.  Yes, Satan does appear.  Yes, they are cheerleaders.  Yes, they do have their own name on their top so the audience can recognise who is who.

The misleading bit is putting the two words together.  They are not cheerleading for Satan or satanic.  Well, one is sort of satanic by the end but that’s just down to being possessed and then raped on a satanic altar.  It happens all the time in middle America.  Or that’s what some films lead me to believe.

The tag line from the poster sums it up quite well:

Funnier than “The Omen”… Scarier than “Silent Movie”

It’s not that much scarier than Mel Brooks’ Silent Movie. Not by much!

It is fully played for laughs as well as some sexual content.  That’s mainly due to two scenes where we see quite a lot of our heroic Cheerleaders and their bimbo-esque teacher, Ms Johnson.  Someone who maybe be important later on.  We actually got the reason wrong but it did have to be that character.

So after watching our girls in their bikinis on the beach with the Football team.  An altercation between them and a party of hooligans from a rival school.  Them getting wet in a water-bomb fight we are their for the main plot.

That being the whole school, and a small town not that far away, is being run by Satanists.  They don’t seem too good at their job as they don’t have a great time summoning Satan, holding a Black Mass and sacrificing an “Untouched Maiden“.

Thir plan goes well right up to Satan takes control of one of the cheerleaders, Patti.  Then it goes south for the Satanists as they discover that she is more powerful than anyone they have ever seen before…

A honroable mention has to go to the sheriff’s pair of Doberman.  Lucifer and Diablo.  The most laid back, ferocious dogs you will ever see on film 😉  They are continually being sent to kill the Cheerleaders by the High Priestess ( AKA The Sheriff’s wife ).  Thus having one of the best lines from the film:

“We want live bodies for the Prince of Darkness, not shredded corpses!“

It all goes to pot for the Satanists when they discover the only “untouched Maidens” was “touched” by one of the Satanists and, as such, ruins their plans for the Black Mass.

Patti, with help from Satan, saves the girls and we leave the girls back at school helping the Football team to win using her own special ways!

An enjoyably silly film from it’s genre. Just listen out for the classic 70s soundtrack to go with the film!