It was Bad Movie Night last night – as well as watching other films the day before!

This time,and,I think, we had a first!  The first time we have watched a trilogy in one , sorry, suffering!

The trilogy is the middle parts of the Tremors Pentalogy.  That’s parts 2,3 & 4 to you!  These films are:

None of the, above, trilogy stars Kevin Bacon as he’s gone on to do better things than direct to video sequels!  This didn’t stop some of the beloved characters from the first film making a comeback.

So let’s get started.  The first of the night was the first sequel to the 1990 film, Tremors. 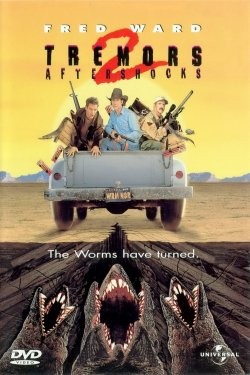 Back from the first film comes Earl and the weapon crazy, and slightly paranoid, Burt. We also have a replacement for Kevin as the foil for a lot of the gags in Christopher Gartin playing Grady. Not only that, we also meet a sexy geologist with an interesting past.

You can, occasionally, see the strings that control some of the monsters. You can also see the trench where the Graboid is towing our heroes’ truck. Apart from that – It’s the sort of thing we look for nowadays. That and very bouncy heads.

It’s nothing spectacular apart from the guys who had the explosives had a whale of a time in some scenes. Especially the finale.

This is also the first one where Burt now becomes the main focus of the series. That and his bouts of wondering, out loud, about his paranoid tendencies. They are still there, some of them are a little bigger. We also discover that he is now divorced from Heather. This film is the start of his rise from just a member of the cast to the de-facto main character of the series. He is the only character that is in all 5 parts.

It’s as silly as the first.  Lots of great lines and massive explosions, tons of goo – some of it thrown by members of the crew off screen! as well as some great lines and a pair of scene-stealing rubber, Mexican, forearms.

The Graboids are different in this one.  We discover in some technobabble explanation that they are from the Pre-Cambrian period.  Not only that is they reproduce asexually.  Think of tribbles that can rip your head off and you’re close.  They also have the ability to evolve exponentially quickly if they have enough food available.  Not good for Earl who has 100’s of pound of high-energy MRE packs.  This causes, with other geological & ecological aspects cause them to evolve into Shriekers that can run around on the surface…  What could possibly go wrong in that one!

Grady, with a lot of persuading towards Earl, it seems that they do set up a monster based theme park.  That along side our sexy geologist who does have some interesting pronunciations of some geological era’s.  That as well as being a Playboy centerfold [ to help her through college ] that Earl has been lusting over for many years.

A truly enjoyable comedy that involves everything.  Tons of goop, massive explosions, rubber limbs and dubious monsters as well as some early CGI.

Tremors 3: Back to Perfection 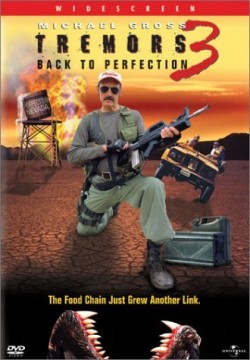 After a time away from his home Burt is back.  This time he is even more prepared as well as quite a bit more paranoid after his Shrieker hunt in Argentina that involves very large weapons and enough ammunition to do the job well!

What could possibly go wrong in the small town of Perfection?  There hasn’t been any Graboid reports in over a decade.  Not only that, his house is trying to be purchased for a housing development.

This time we see new characters as well as Burt to keep us entertained with his liberal use of explosives!

This, like the 2nd film in the series, just get better with age.  The budgets do get lower and in some places noticeably so.  On the other hand, they have CGI available and use it to some hysterically bad effect in some sequences  [think Birdemic quality ].

Not only do we get the Graboids, and Shriekers from the 2nd film we now get a new mutation.  That of the Ass-blaster.  Yep they now fly by explosive farting!

Cue more paranoia, huge explosions [ some by accident ]  and tons more gloop.  We do have a love story that nobody seems to see happening – including the people involved!  We have more hijinks as well as great dialogue and the use of moonshine, plastic pipes, arrows and flaming rags!  Just remember what I just mentioned about the Ass-blaster!

Another great one.  A fitting extension of the series. 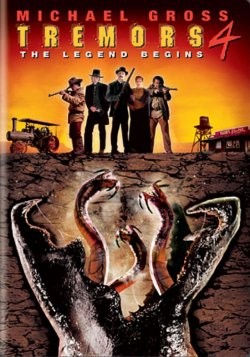 As with all horror series, or are they franchises now, there has to be a prequel story.  That to set up the rest of the series via retroactive continuity.

This time it’s 1889 & we are in a town called Rejection.  A town that could do with a change of name.  I wonder what they could change it to?  Anyone?

The town of Rejection is small but with a silver mine.  Bottom Dollar Mine.  It has a problem.  Men are vanishing or part of their bodies have been.  As such, nobody wishes to work in the mine and the town is almost being abandoned due to everyone leaving town.

We also meet Burt’s Great, Great Grandfather a Hiram Gummer who doesn’t have a gun or know how to use one.  Very different to what his Great Great Grandson becomes.  Not only that, he has a secret that maybe mentioned later.

The town is being over run by strange creatures that are called Dirt Dragons by the local Chinese shopkeeper.

Hiram does exactly that and puts a newspaper ad wanting a gun-slinger and one readily appears.  Wearing a faux-faux leather jacket, jingly things on his gun’s holster and an attitude that is seen in someone else.

There is a nice, running, gag that involves our heroic Mexican, Juan, and the inability to keep a hat for more than about 30 seconds.  He goes through about half a dozen throughout the movie.  Not only that, our heroic Hiram does have an epiphany at the railway station.  Sells what he has left and goes on a gun buying spree that saves the town of Rejection and renames it Perfection.  All is good!

There is a similar love story as the previous chapter.  Again, with nobody realising what was happening until the end..