I have been watching bad movies for a long time.  Mostly every Friday with a group of friends.  This is an account of what was watched and what, whoever wrote the post, thought of them.

For the first post, it should be me to start.  Normally 3 films are watched and a lot of alcohol is drunk.  Mainly so we can get through to the end of the films!

The three films watched were:

It’s been many years of watching bad movies and we haven’t seen one of the greatest of the genre.  That being Plan 9 from Outer Space ( also know by its original title Grave Robbers from Outer Space – that name is mentioned in the prologue )

So let’s get on with the reviews…

Plan 9 from Outer Space In Color! 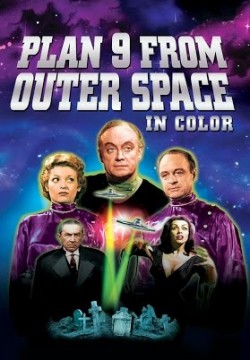 Yes, they did it! They made it better! They made it colourful! They also added some great gags! Look out for changing pictures on the wall in one scene.

This is meant to be the “Daddy of all bad movies“.  IMDB seems to disagree with a, respectable, 4.0.

It does have it’s wobbly sets, reused scenes of Bela Lugosi at various speeds. Bits of wood for aircraft controls, hubcaps & pan lids for spacecraft as well as military stock footage is all blended together into an, almost, coherent story.

It is well worth a watch just to see what you can do on a minuscule budget and no visible talent from the director.  A must watch for all fans of the bad.  Just grab a copy and watch it the colourised version.  It’s been brilliantly done and very enjoyable.

What makes a film based on a comic book better? How about a lavish, Cole Porter, song [ Let’s do it if you want to know ] and dance number thrown in the middle for no reason at all?

When the World is stuck by an asteroid that sucks all the water off the planet, it makes water the most expensive commodity known.  Everything is down to making money out of water.  That is where the, evil, Water & Power come into play.

Tank Girl, Rebecca, is on a mission.  To avenge the death of her boyfriend and saving her friend, Sam, from the evils of Liquid Silver.  Mainly down to the song and dance number mentioned earlier.

It all ends up with Ice-T dressed as a human-kangaroo hybrid kicking butt in the explosive finale. Our heroine does save the day, her friend and kill the evil head of Water & Power by sucking all the water out of his body.

A completely dis-jointed film that without any knowledge of the original base material just makes it worse. It’s not bad enough to be thought as a bad one; on the other hand, it’s not good enough to be thought of as good. It’s in a bad-good movie limbo. Even so the human, and one dog, kangaroo hybrids are nicely done 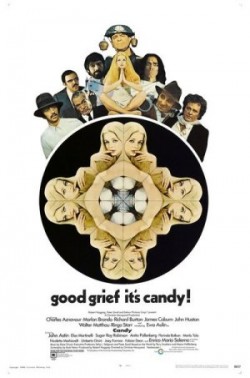 Based on the book of the same name, Candy is a bizarre look at who will be in a film if they get one massive name. That being Marlon Brando.  With him signed on they also manage to get some of the biggest stars of the era: John Astin, Charles Aznavour, Richard Burton, James Coburn, John Huston, Walter Matthau and as a Mexican gardener, Ringo Starr!

What makes this film so enjoyable is the completely bonkers plot and the overblown use of stars who are playing for laughs.  It is hard not to laugh at great lines such as not being able to give a blood transfusion to a member of your own family “Well because that’s, that’s… That’s incest.“!  The accent that Ringo Starr brings to his character is spectacular in its range.  From cod-Mexican to broad Scouse. mostly in the same sentence. Occasionally, in the same word! It’s a skill that he carried on when he played The Pope a couple of years later.

It makes no sense as Candy blunders from one sexual encounter to another.  Meeting strange characters, seeing her father have an electrical socket wired into his brain so it can remove the built up energy, 110 Volts AC, that could kill him.  We know it’s 110 Volt AC as someone plugs a radio into his skull-socket!

I’m not going to mention Richard Burton’s drunken, paedophile, manikin raping “poet” but I do have to mention Brando in his amazing appearance as a fake mystic, Indian, guru.  You can’t make things like this up no matter how much drink, or drugs, you take!