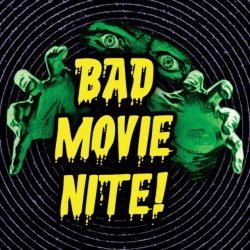 Bad Movies & beyond has its foundations from an idea to gather a couple of friends together and watch bad movies.

The original plan was to do that “once in a while“.  Say once a month.  That idea failed as the week after we had more movies to watch.  As such the regular Bad Movie Night was started.  Mainly on a Friday but sometimes on a Saturday.  It’s been running for many years but now is the time to actually get around to document some of the films that have kept us amused for so long

We have also branched out and had a “Good Movie Night“.  That changed it’s name to the “Good, Bad & The Ugly night“.  Yes it was named after this film!  That involves watching a trilogy of films that follow those rules.

The scores that all films are given are just our feeling  not related to actually how bad the film is, just how much we enjoyed them.  Were they enjoyably bad or just a bit Meh!  We have had the full range of films.  Most genres have been suffered but horror seems to be the prominent one.  This is because it’s cheap to make a horror film compared to sci-fi

If you like something you have read here and want to link to the story, please do as we’re not fussy.

On the other hand, if you wish to link to the site on, for example, a links page then please use any of the below images:

All views are © Bad Movies & beyond.
All images are © their respective owners.
Some content has been taken from the British Board of Film Classification’s website.
Synopses are taken from other sources around the Internet.  Please let us know if you wish content to be removed.