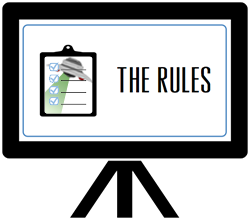 As with everything, there has to be rules. Well, more guidelines that we follow most of the time. It’s a simple, short, list: