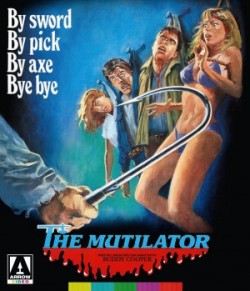 Oh dear, oh dear, oh deary me. This is truly bad but not in the kitsch ‘so bad its entertaining’ cliché we thrive upon oh no sir but bad as in mind-numbingly dull and the cause of confused sounding bouts of “why are we watching this again?” from all assembled.

From the off it doesn’t bode well, the theme music seems as incongruous as the Beach Boys providing a hip soundtrack to last weeks ‘Americathon’ but even more off putting as this is supposed to be a slasher flick. We had the option of watching the film makers introduction which by far was the most entertaining part of the wider film experience as at one point they looked as though might fall out with one another on the exact details of why it took so long to get the ‘Director’s Cut’ made and who was to blame for the footage vanishing. Sadly no comedic old filmmaker fist fights instead we had to wade through what seemed like hours’ worth of tedium. Maybe in age of such purposeful trash as ‘Lesbian Vampire Killers’ and the like we’re spoilt for ‘bad movie’ horror fun and there is a place within the ‘bad movie’ clique for the misguided souls who have made a film which they think is genuinely good but obviously has no actual skill nor merit to it but entertaining for that. This though, wow, this just stinks. Again we’re blessed with filmmakers unaware of how bad they are at making films, a cast which seems to have been plucked directly off the street and a script which makes not a lick of sense no matter how long we poured over it in post viewing discussion.

For a start the concept behind most good/bad slasher movies is that we all know the rules and the tropes and the take great pleasure in anticipating the ‘Lewton Bus’ moments and being surprised when they still manage to catch us unawares. So many of those moments were ruined in the movie by a very literal attempt to show us everything the mad killer was getting up leaving little scope to be surprised by his sudden appearances. Secondly whilst the acting is bad, and that would often charm us into enjoying the film for that alone the setup of the wholesome all American tweens on a summer break goes on far, far too long with the cast rather awkwardly mumbling over their lines. Finally the nitty gritty of the film the supposed ‘mutilations’ which supposedly is the reason the film is called the ‘Mutilator’ come way too late in the day to redeem the effort of the scene setting, it’s like two different genres clashing. That said once the gory stuff gets underway it starts to get promising but it’s a start/stop affair and the killer fails to keep the body count and flow going. The effects are entertaining though, the final leg severing being ultimately pointless bit of excessive violence but all the more amusing for that.

Then cue the sugary sweet pop Jazz music which plays over end credits of ‘funny’ bloopers which again seems misplaced in such a movie but at least managed to be entertaining.