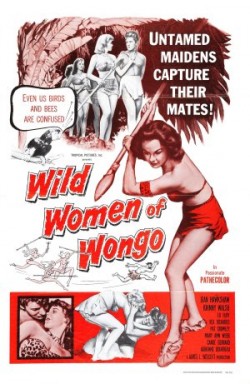 Any film that starts with a voiceover by Mother Nature explaining to the viewer about how she and Father Time created a topsy turvy experiment around 10,000 years ago has got to be good, and by “good” I mean “Bad”

At that time the two made all the women of the Wongo tribe beautiful and all of the men brutes, they put all of the handsome men in the tribe of Goona and they made all the Goona girls not beautiful. To be honest there was little discernible difference between the beautiful and not beautiful people. The so called brutish men were not the dundering Neanderthals as expected but were just less clean shaven than their beautiful Goona counterparts who looked and acted like rather handsome twinks or catalogue clothing models. The “not beautiful” women of Goona are not as minging as you’d expect except for one loud mouthed larger lady who did the most fantastic wild woman scream just before fleeing the Wongo women. In fact her scream was so brilliant that we rewinded and watched it four times, each time it was drowned by howls of laughter from the room.

This film is the epitome of Camp, the acting style is firmly in the SPAM-dram category (see Glossary of Slang Terms of Bad Movie Towers). The most indepth character was a talking parrot and the tribe peoples’ Dragon God which consists of a badly made rubbery crocodile on a stick.

The inhabitants of Wongo and Goona were unaware of each other’s existence before the Prince of Goona arrived at Wongo displaying the Wing of Peace with tales about a tribe of ape men who bring war. The beautiful women were enamoured by this handsome stranger.

To be honest, the story is largely unimportant, the plot, script, directing and editing is all laughably terrible with all actors speaking like they are reading it for the first time from an idiot board just off camera. The parrot was cheeky but lovable and the women’s fur and skins dresses were surprisingly well fitted while all the men wore quickly assembled wraparound skirtlike clothing to protect their modesty.

A few other key scenes to note were several bitch fights, some random tribal dancing for the Dragon God, what looks like Wilma and Betty from the Flintstone and the most ineffectual fighting scene in the history of films which mostly consists of non menacing spear pointing to drive away the ape men.

All in all, this was a terrible film with several laugh out loud moments. 52mins seemed like an awfully long time but if you love vintage camp films and wish to to kill some time then The Wild Women of Wongo may be just your thing.