It’s been a strange one for this week. Three things were watched and three people reviewing them.

The others were two pilot episodes for Gerry Anderson series that were never picked up as well as the The Wild Women of Wongo.

One was left for me to review. That one involves 4 cast members from Police Academy series as well as a ton of stupid “in jokes” from that series. On as well as other films of a similar ilk to this one. 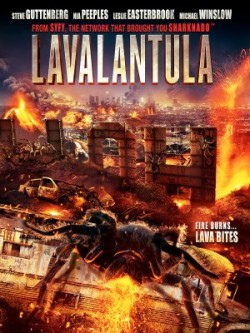 Where can I start on this film. It’s dreadful but with that out of the way it does have its movements. It does star a very old, and sweaty, Steve Guttenberg. Then again it has been 20+ years since I remember a film with him as a star name came out. Then again it is always good to see the man in a movie. Even if he is out acted by CGI spiders at some points.

You can figure out the story from the poster and it doesn’t let us down. Lots of CGI psiders killing people in comnical ways. Not only that, we are back in a place we have been before. The La Brea Tar Pits. Last seen in this movie. They must be cheap and allow anyone to film there as long as they don’t break anything real!

The film starts off with us meeting Steve strapped to a chair, wearing a vest. Yup, the nods to 80s films start early. A short, and bad, fight happens and then we discover because if his ineptitude that we are on the set of an action film. Now we meet two more Police Academy alumni. Not only that we discover our leading man doesn’t like bugs. Hummmm! Not only that, he’s a washed up has been actor who last had a hit over 20 years ago. Is this film a parody or becoming factual for some of the cast?

Now we discover his wife and family are waiting for him. Not only that our female lead needs to put more clothes on than what she wears for most of the film!

They don’t stop considering we have four members of Police Accademy in this film! the well known LA volcano erupting and causing, quite minor, earthquakes considering a random volcanic eruption has happened on a fault plate. One of the strange volcanic eruptions that throw explosive rocks straight at cars. not only that but explosive rocks that contain Tarantulas made of fire! Not only that actually quite good models. That and quite comincal deaths. That and it was lucky that or hero drives a 4 by 4. “This is the freaking apocalypse” remember!

We now hear more about an assault that he has been involved in as well as some of his back story as the Red Rocket as well as playing similar 80s action heroes like Snake Plissken to name but one.

WE discover that the Tarantulas live underground and then make holes to the surface. the heat given off can destroy car tyres and mane trainers a bit melty. This isn’t good for our hero as he is now carless!

Now we are getting going with the plot. That and the untimely death to another Polica Academy member. This time by having her face burn off by the evil, fire breathing, Tarantulas.

After a short hitch hike we discover he is met by a tour bus that he ends up strealing to get downtown to save his son. This is where it starts to get going after the dull Act 1. We know that his son and, maybe shortly, girlfriend have been attacked and our hero fights off the bugs using a bus and his newly found sidekick. A fan who doesn’t know the difference between real life and the movies. A good start for survival in this sort of 80s movie star revival movie. This is where we see a great selection of driving through a green screen forest. YOu know the sort. The background isn’t as bury or out of focus as it should be.

The volcanic atttack is spreading and getting worse. We now hear from the TV news reporters that the bugs are frying people using their fire breath. Not only that we get reports that our hero has stolen a bus and is driving it.

Disaster strikes as his wife is now under attack from a mutant bug after it comes down teh chimney and starts spitting fireballs at her. THis leads to a great comedy fight sequence involving a magical swords, throwing stars and a sore arm trying to break out a shotgun from a glass case. With all that going on we also see a great line of “80s posters” including one for “The Executioner”. a total rip-off ot T2. With the help of the bug we get the shotgun free and it is then shortly removed.

We now have a fire on the bus due to bug goo eating through it. As always just in the nick of plot it explodes in a fireball of matt.

There are sequences that use the news to carry on the major plot. Sometimes you are just waiting for a gag in the background involving a spider killing someone. All we get is the same people walking either left ot right or right to left in the background. It’s disappointing to miss out on something so silly. Then again this doesn’t have much of a budget!

We are now getting the gang together. The Army have found the wife. We now meet Pirate Jack. A stuntman who worked with our hero earlier. Then more destruction and a nice Indiana Jones nod and we meet the star of Sharknado who has more pressing issues with sharks. Now comes the mass death and destruction of everyone who gets in the way.

Around now we have lost the will to live with this film but we have suffered so far. We just continue. More destruction and killing of the bests. This then leads us to the fact that they can be killed by compressed nitrogen. Something that was used at the start. Back to our Police Academy reunion.

It’s the good people of the movie industry who will save the day in a good old “American dream” speech. Think the ID4 speach but change it to movie industry comments.

After the building. Straping C4 to nitrogen taks, they are then thrown into the holes so to explode and kill everything that needs to be killed. Tank throwing montage happened until we get to the end of level boss fight. Now the explosions have gone off except one didn’t and we’re still waiting for the end of the story to get us. When will our hero come to save the day in the costume of his most famous character. That being a horrid Rocketeer ripoff suit. It;s good but not on a 50 something porky gentleman. The thing to wrap it all up in the last 10 mins.