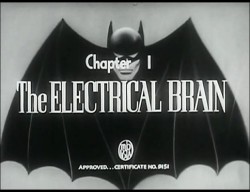 Over at Bad Movie Towers we started something new.  A serial.  Just like it used to be in the golden age of cinema.  A 30 minute episode with a cliffhanger at the end to get you to come back the next Saturday.

We have already seen Flash Gordon and are still having nightmares about the acting, and animal abuse, in that one!

This is the first time we see Batman not in a comic book.  There are some strange things that happen.  Something that involves the evil Chinese.  A way to control people with a brain implant and what seems to be a drive-through prison!

We first meet Batman and Robin after they kidnap some mob members, handcuff them to a lamppost and call the police to come and arrest the, handcuffed, miscreants.

We then learn that the fiendish Asian races are there to cause chaos and extortion.  These Chinese look a lot more like Mexicans than anyone from The East; this is probably because all of the Asians in America were in interment camps at the time!  They are fiendish as they can control a man and make him like a zombie.  Only then can they carry on with the rest of their evil plans.

This episode focuses on two things.  The first was the brain control and the second is stealing some plutonium that happens to be in a safe at the hospital.  A nice, safe, place to store something radioactive!  Batman & Robin do appear to save the day as well as, presumingly, the love interest for the series.

We leave the dynamic duo, well one of them at least, falling off the roof of the hospital to a, presumed, doom…