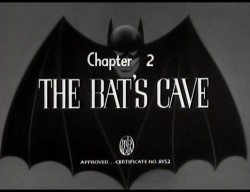 We left Batman at the end of the first episode falling to his death after being thrown off the top of a building without any known method of survival. We all were wondering how he would get out of that one… The answer is quite simple. Land on a window cleaning crew’s platform. Just before pushing one of them to his, possible, death! Not safe, Batman has to help capture the crooks that tried to kill him in the first place. They manage to capture one of them before they escape along with the ray-gun. Kidnap is probably a better word & then take him to The Bat’s Cave!

Rubber bats on strings is the preferred way to get answers out of a goon. He quickly spills his guts, sorry the next part of the plot. We get more about what the gun does. Alfred is a bit jumpy considering what his job entails.

The strangest thing has to be the hairstyle of Master Grace as well as Baman’s ability to reek havoc for no apparent reason. Such as using the ray gun randomly that doesn’t help Alfred’s nerves or sanity.

Dumping the goon with the police – by throwing him out of the moving car was a genius move. Why don’t the police go and try and find the vigilante who is kidnapping people and then dumping them with the police.

WE have forgotten about the “Japs” – well the very Mexican looking & sounding one. There is now a plan to kidnap Linda by telephone. Robin was tasked at stopping this. A failure for Batman’s Dick!

After a quick change in the back of the car, our caped crusaders are now ready to spy on the evil Japs. They have a strange time in a hotel that seems to be under the Japs control. Using some strange x-ray machine to show who is who. We then enter Narnia. Well, a room that they are using to torture Linda into giving the location of the Ray-gun that Batman has safe.

At points Batman’s tights do tend to look a lot like Nora Batty’s. A bit baggy around the knees and bum. Not only that, we discover fighting with capes isn’t as easy as it looks in cartoons. Both Batman & Robin get caught up in theirs. Not only that, they tend to randomly disappear & re-appear throughout one fight scene. This is the one that involves Batman almost losing the fight to his own cape. Gassing Batman and then escaping over the buildings on some sort of wire. That wire being electrified. The current going down the wire like a gunpowder fuse in a cartoon. Running at speed of plot right up to the time of the cliffhanger…

It is a bit slow in parts but we have to drive the plot and not just have one long fight scene. It was enjoyable but after noticing Batman’s tights we lost all interest in the rest of the plot. That was until we saw the real reason why Edna decries superheroes use of capes!