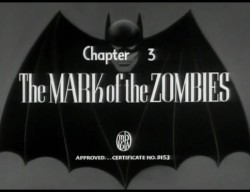 We start just before the end of the last episode with Batman, Robin & a magical cape fighting the Jap henchmen.  Then comes the cliffhanger.  Will Batman fall to his death after being electrocuted by some strange electricity?

One thing that you can wonder is how it goes from night on the wire, to broad daylight below on the ground?  more strange Gotham weather?  That and the henchmen that ain’t scare of them “squint eyes“.  More casual rasism to add to the serial as it goes onwards.

Back to the plot.  Our gal has been rescued and have been sorted out by a doctor and Bruce Wayne.  The Squint Eye boss isn’t happy with the outcome and our head goon maybe in for something that he isn’t expecting…  Not only that we have figured out who our head Jap, Mexican or Puerto Rican sounds ( and looks like a bit ) like.  Peter Lorre.

We have someone who won’t be in on the crime syndicate.  This time we need a slight brain re-purposing with the brain tweaker.  Always safety first, our Jap dons his rubber gloves so he’s protected before turning on the brain scrambler and all it’s flashy lights!  I have no idea why he did that but it was needed.  It maybe something that’s needed so he can use the brain control device.

Another thing as we are with Batman, and his butler Alfred.  It could be seen a a bit of a clue as Alfred drives for both Batman and Bruce Wayne.  Even the most slow-witted of henchgoon should be able to put two and two together to figure out who Batman actually is.  Now back to the plot.

We’re now seeing the “Japanese cave of Horrors” for only 10 cents you can see what horror awaits.  COuld this be some sort of front to the criminal underworld?  Yes it is, and the way we find out if you’re a goon or not is a strange x-ray that shows you have a ring!

Now we’re talking about the plot and this time it’s a bomb.  Not only that, we have discovered that someone has found  a strange shaped gun and wishes to return it to its owner.  The evil Japs are setting a trap to capture whoever put that advert into the paper.  But they are a bit smarter than the Boy Wonder who has got thumped over the head.  Now we have the episode’s fight scene.  All started by a falling good through the rooflight.  Shortly followed by Robin falling on his body.

Alfred has been getting the wrong end of the fight and calls “Scotland Yard, The Police or anyone who can help” as he’s “being murdered”.  He does manage to scare away our Fedora wearing goons by firing about 8 shots from a 6 shot revolver!

After the goons do a runner, Batman discovers a map that has the Shoreline Railroad on it and the Westgate bridge is circled and 10pm is noted.  Our heroes only have 26 minutes to do something before it hits 10p.  That being a humongous explosion when the bridge explodes!  A model train is coming and Batman is trying to defuse a bomb but has been knocked unconscious.  What will happen next?