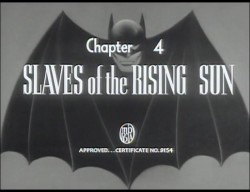 We last left Batman unconscious with a train hurtling towards him.  How could he possibly escape his doom?  Not only that, we have one of our party who is still in love with Robin’s hair!

WIth Batman still on the tracks after being hit by a wrench, he now lays unconscious on the tracks whist a back projected train screams towards him and his fate.  With everyone gone, it’s down to Robin to throw him off the bridge into the river.  Thus saving the day!

Our strangely non Japanese baddie now has become more evil with the addition of some alligators ( or are they crocodiles) in his lair.  What could happen with them later on in the story?  Stay tuned to find out more!

Now we have the head of the evil talking about the triumphs of their men.  Stopping the train and getting the ray gun back.  Now we know what that outcome as but they don’t.  I wonder how they will take it?  Probably not that well and may involve a trip to meet some crocodiles – If they do they will only be lightly killed as this is a serial for kids!

WE are now back at the carnival ride.  We are seeing some more of the exhibits.  They all seem just to show how the Japanese army tortures people for their own pleasure.  Yippee for wartime propaganda!

The Japanese even then didn’t like inefficiency and our goon in chief is having a good rant about the evil Jap & a good wartime propaganda against his, soon to be ex, master.  A change of side.  How well will that go for him?  Do we have a robot man treating him badly?  Nope, a gunshot to the chest normally wins over fists alone.

He did become crocodile snack.  Another, unseen, death to add to the collection over the last few weeks.

We now have a break in the case.  That ended up with Bruce hitting a fortune teller because they wouldn’t give him a reading.  We now have a plan to protect our dame as well as capturing any goons that get in the way.  When will the fight start and when will our heroes be put in peril?  We have tried to get rid of the dame but she has been captured, again.

The Jap agents now have the papers to get more radium for their ray gun but are being chased by the Bat Man.  Will he get there in time to save the day or will something try and stop them.  With a nice stunt to get onto the vehicle and standard rear projection afterwards, batman is trying to stop the armoured car.  Will there be a cliff and peril involved shortly?  Of course there is.

What will happen?  We can only wait and see…