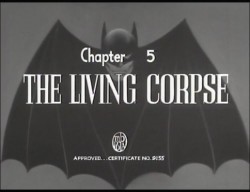 We left the Batman flying off a cliff in an armoured car. How could they have survived that one? The answer seems that is was quite easy. Just jump out before the vehicle flies off the cliff! Good sensible advice to any wannabe superhero.

You do wonder how this is going to be spun to the “Japanese” boss of the underworld. They need to keep their incompetence quiet to save their lives. Either that or pass the blame over to the dead goons that drove off the cliff.

It was noticed at this time that Robin only uses Bruce whenever he talks to the Caped Crusader. Wouldn’t it be better to try and keep his identity a secret?

I think our evil villains accent is getting, over the weeks, more and more indecipherable – He’ll be talking gibberish sounds and not mangled Japanese/Mexican one that is being used at the moment…

We are now in the midsts of the plot. We discover that there is a submarine off the coast that needs to get a message from Japan to America. How are they going to do that one?  It seems that they are just going to throw it overboard and let it wash up on the beach.  While we wait for this to happen, our heroes discover, via the ever increasingly incompetent that their butler seems to be, a clue in the mail that was going to be thrown away. All because of the way the stamp was put on the envelope!

It was a blank page.  Now what could be on it?  A bit of fizzy chemicals mixed together we get the answer.  What could it be? A new cookie recipe – No, the entire plot of the rest of the episode.  Capture a new aircraft from the factory.  Wonder where they could be off to this time…

After a trip to the beach, in a hearse, a coffin appears in the secret base of the baddie.  What could be in it. Will, I bet on a body.  I win!

Now the body just needs a bit of help to give out his information.  So it was on with the marigolds, strap electrodes to the body and then throw a large amount of sparking electricity through it.  This is the best way to ring a body back from the dead.  It seems to work very well in this case.

In a state of “animated suspension“, he is brought back to life.  He only has a short time to tell the plot.  This guy’s acting is the highlight of the episode.  One feels he is just reading his lines from a cue cad just off screen as it is quite an amazing performance.  This is where the baddie finds out the plot of the rest of the episode.  Quite a way behind The Badman.  He then gives his life and a microdot photograph of the other airfield with an “X” on it to show where the aircraft is.  Wouldn’t it be easier just to say “Look in the hanger” instead of this rigmarole?

The final plan is coming together.  The capture of two mechanics and then brainwashing them into helping steal the plane is a simple one.  Offer a free ride on the Chambers of Japanese Horrors.  Trap them in the only place that has a door to the secret entrance.

They are met by or villain who’s accent is commented upon.  Basically saying it’s no good.  We could have told him that from episode 1 of the piece!

Getting into the secure airfield is as easy as wearing a badge that has a number on it.  Why couldn’t they have just made a badge or two and just walk in.  Thus removing the brainwashing machine.

They also have video of the plane in flight that helps see when the Batman appears and tries to stop the plane.  Whist this is going on a over zealous member of the “Home Guard” radios in the aircraft’s movements.  This leads to them haing to bring the aircraft down using stock war footage, probably of British crews firing anti-aircraft artilliary.  This does eventually hit the aircraft and it starts to crash.

How will The Batman survive?  Find out next time in this theatre.