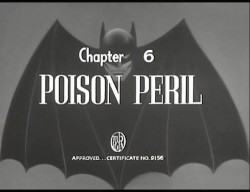 We left The Batman on a plane that was crashing and we wondered how he was going to survive that one.

The answer is he just does.  He doesn’t jump out of it and parachute down.  He just staggers out of the burning wreckage & then goes back for the goons he’s just beaten unconscious in the fight

He is good in that way.  Managing not to have that much collateral damage.  Even if we have seen off-screen deaths of goons before now.  hey have found bodies in the wreckage but not the Batman himself.  So we have to tell the Submarine about the problems that we have and then they have to be careful of American Destroyers in the area.  What could possibly happen to the submarine after that ominous piece of foreboding?  Yep, they got sunked!

Now we meet our series bimbo again, sorry that would read our independent woman ( Linda Page ) at Wayne Manor with Alfred keeping her amused before Bruce & Dick get back.  They do this via the secret entrance in the Grandfather clock that’s in the same room.  We now meet Robin for the first time this episode and our love of Robin’s hair continues but this week it looks like one of the bad guys from Dick Tracy as well as Alfred being useless at anything else apart from butlering.

This is now where we get the plot for this weeks episode.  Someone from out of town who has a mine needs to get in contact with our bimbo’s Uncle Martin to sort out some paperwork as the mine has struck it big.  Are you now thinking what I’m thinking?  If you are, I would advise you to check with a doctor you pervert!  Only kidding.  Now what could happen if e meet in a hotel room in Gotham with goons about.

Now we have more disasters as Mr Big Mexican, sorry, Jap finds out about the disaster of the sinking of the submarine and blames The Batman as well as hatching the plan to find out more about our Miss Page.  It also involves installing a Dictaphone [ just one of them not a bug or anything useful ] in the apartment without her knowing.

We now meet the man, Ken Colton, who needs to talk to Uncle Martin.  Not only does he have one of the most incredible beards in the whole serial, to date, but he does like to wear his hat as much as possible indoors even when a woman is present!  He also happens that the mine mines radium.  A strange coincidence?  Not only that he can show anyone what it liiks like as he carries a chunk of pitchblende, the mineral that you extract radium from, around with him at all times.  No health risk as it gives off a wonderful glow.

Now we get into more of the plot.  It was thought to be a gold mine but he struck something better.  Millions of tons of high grade pitchblende.  We also know this as the Japs are listening in.  I don’t know how as they only installed a Dictaphone and not a microphone and transmitter.  Then again this is the 40s and they were simpler people then.

We now area about to discover where the mine is but our bimbo is a bit clumsy and drops a load of envelopes and maps on the floor.  This helps Dick to discover a microphone and he breaks the wires.  More gormless gooning by the goon who installed it!

We now switch to the hotel that our miner is staying at.  It’s already filled with goons that are trying to locate the map of the claim so they can steal it and make a new radium gun!  Remember that readers?  Lucky it was Bruce and Dick that game him a life to the hotel.  One quick change later they are prepared to help their new friend.  He could do with some help as he’s getting beat up by the Goons.  Luckily, The Batman does save the day in a more comical fight screen that we have seen before.  I wonder what is used to keep the Goons fedoras on their heads as they don’t more during any scene.  Fighting or not.  They just stay glued on in the same place.

We now switch to a little later when the police have arrived and he’s been looked over by a  doctor.  Who knocks on the door but Bruce and Dick shocked to hear that he’s been attacked.  The next day he gets a call asking him to meet someone somewhere but Bruce thinks it could be a trap.  he volunteered to go over to make sure and then call when its safe.

Bruce now puts a plan into action that involves putting the help, sorry trusted manservant, Alfred into danger playing the part of our friend, Mr Colton.  Mr Wayne describes it as pitch hit for Mr Colton for some bizarre 40s slang.  This is where we see how evil Dick Ward actually is by shit  stirring and getting Alfred to be the patsy and take the hit and fall for the sake of it.

Mr Colton’s accent has changed from Texan to more of a upper class twit of an English one.  He is now in the hands of our gormless Goons who are trying to get the information out of him in regards to the location of his mine as well as trying not to throw him into nasty body dissolving chemicals.  How will that plan out?  Will out patsy keep them talking before The Batman arrives?  What do you think on both accounts?  The answer is, just about.  This then kicks off into the end of episode fight that leads to the cliffhanger.

It was going all to well for Alfred until he got his fake beard ripped off and his cover was blown.  It didn’t look good for him from then on.  Now The Batman swings in to save the day.  This after putting his manservant in deadly peril.

The fight continues to destroy the room more and ore as it goes on.  Have you ever been so into a fight that you have to stop and rip shelving off the wall or use a chair to keep the guy you want to hit away from you?

This week it’s all to do with the nasty chemicals, an electric spark, fire and a huge fiery explosion to end it all.  Not only that, our hero is unconscious, again!  Something that he rearly needs to talk to a doctor about as this is very bad for the brain!