It was a fun night at Bad Movies Towers. We watched all the films, in three different formats. VHS, saved on the “Sky box” and on the computer.

Our first film was the one on VHS… 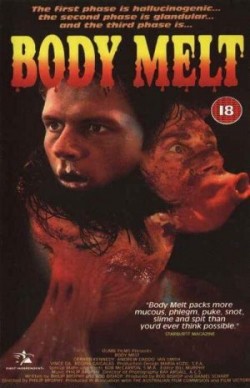 An amazing Australian film that involves a secret plot to test unstable chemicals on the populous without telling anyone.

So with that little it out of the way, we get to the film.  It has everything that an Australian film.  We think that’s the third phase as the scientist didn’t manage to finish the sentence as he crashed and his head started to leak.

Not only that, he did have a love for detergent that was drunk in a mysteriously looking way.  That and the oozing of goo from his neck didn’t look good for him.

Not only that, there is a strange side story that involves a family of in bread yokels that prefer their own family member than a stranger to be “very friendly” with.  Not only that, they have a nice habit of killing strangers with bits of wood meeting their genitals!

Throw into the mix the requirement to remove male ribs in quite a nice way.  Death by placental afterbirth.  Some dayglow yellow stuff injected.  That and the yokels’ father has a strange dark secret.  You have the start of a great film.

We haven’t even started to talk about Ian Smith, aka Harold Bishop from Neighbours.  He is playing an evil, mad, sentient version of Harold.  It’s the only character he seems to be able to play. We discover he has a link to the father of the yokels.

What also we also discover is that steroids do strange things to the human body.  It makes you walk like you are about to shit yourself as well as thinking tends to be optional apart form having to wear stupid 80s workout gear!

It’s an enjoyable film all round.  With lots of  great lines, effects and bouncing rubber heads to keep everyone interested. 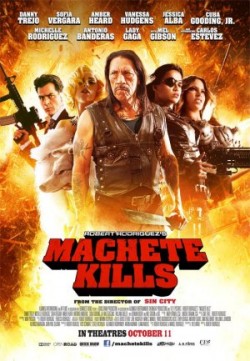 Danny Trejo is back in the sequel to the 2010 film, Machete.  This time he has the President to help.  Also a beauty pageant contestant who also seems to be playing the “Q Role” in the film.  Giving our hero some great guns and greater props, sorry, machetes.

Full with some bloody CGI shots of blood spurting everywhere as well as people being cut neatly in twain with some rubber head action thrown in for fun.

It’s a bit of a “Meh” film.  It was for me, other people may disagree.  They are wrong if they do!

It does have an interesting cast.  From Danny playing, well, Danny.  Love Machine, from the Titty twister.  Mel Gibson as the baddie as well as ladies with Gatling gun bra, and panties.

It’s an ok homage to the Grindhouse film of the 70s.  Or it does at the start – A fake trailer, interesting “film stock” and everything else you would expect from a grindhouse film.

That was at the start.  Part way though it seems that the director forgot that this is a parody / homage and went back to filming it in a very much of a 21st century comedy / horror film. 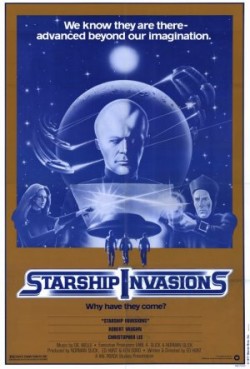 We all got confusd about what this film was actually called.  The answer is that it had two names.  Starship Invasions for most of the world and Project Genocide just in the UK.  After that was sorted out we started our decent into this great 70s example of Canuxploitation.

With two great names in the cast we thought it was going to be a winner.  Then we remembered that Christopher Lee’s career at that time wasn’t doing that well.  Robert Vaughn.

It’s the costumes that make the film.  More the one that Christopher Lee, and his minions, have to wear.  It’s a bizarre combination of dress and head cosy.

Not only that the stupid C-3PO type root.  More like a man with a large bin over his head & body.

This is a film that was released the same year that Star Wars came out.  I have no idea where this film thought it was a good idea.  That and the way that our alien overloards are using electricity to control the world.

Things happen.  Roert Vaughn turns up.  We were expecting David McCallum to walk in at any point.

It’s an enjoyable film even if it shows that an actor will appear in anything as long as there is a cheque at the end of the week.  That’s what I got from Christopher’s performance.  That and the seemingly zero budget to do any special effects with.  Even so it is one of the last sci-fi films of the old school.  The ones that came before a small film called Star Wars changed the genre forever.