I know it’s not Saturday but yesterday I had something to do not that far from Bad Movie Towers so we decided to do a movie night. It was a good bad one. One that’s been recorded but not watched and one to complete the series. 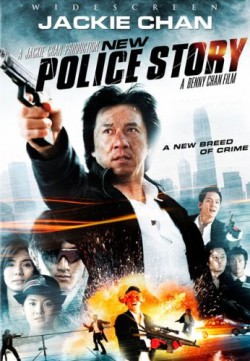 One of the things you realise whist watching this film is how badly Jackie Chan can act drunk. It’s more of a caricature of a Hollywood drunk. Think Lost Weekend or something similar and you’ll get the idea.

The film starts in modern time , well 2005 actually.  We meet a very dishevelled, and comically drunk, Inspector Chan.  Yep we have our hero!  But why is Jackie Chan drunk?  he never does that!  All is about to be revealed in a flashback that covers the rest of Act One.

Now we step back a year to a bank robbery with a gang who want the police to be called.  Not only that, their way of getting to the money and the aftermath seems a lot like they are playing a game.  We discover this after the first robbery.  Not only that one of the policemen decide to help himself to some ill-gotten gains!  The gang escapes to raid another bank.

This is now where we discover that they are playing a game as they give themselves score on how many policemen they killed.  This is where Inspector Chan gives a press conference promising that the gang will be in custody in three hours!

This is where it rearly starts to go south for our hero.  The police discover where the gang is.  Chan and the rest of his men are sent to arrest the gang.  They are walking into a trap that ends with the building exploding and all of Chan’s men dead.  There is a nice visual here when we cut to Jackie all covered in white dust.

We also discover that Chan has a girlfriend who he wants to ask to marry him.  However, with the trauma of the loss of all of his men, he hides from here and turns to whiskey.

After this we now jump back to the start of the film and then the film continues.  A mysterious, young, policeman discovers Chan drunk in the street and tries to help him.  This polieman identifies himself as PC 1667.  He is also there to help Chan get back on his feet and find the gang that killed the Inspector’s men.  More of this character later.  This act is the slow, annoying bit.  Chan doesn’t like our new character and calls him “A Pest“.  This rehabilitation is successful and he goes back to the police department to track down the gang and end his pain.

Now onto Act Three.  This is the explosive one.  We now know that Chan is back to how he was.  We also gain a female officer who falls for our pest.  The gang has upped their game.  They seem to be more open of who they are.  Either that or our policewoman has phenomenal Google skills to find everything out about the gang that the rest of the police cannot find in a whole year.

They track the gang down to a rooftop party [ yes you are correct in thinking that “what could goon now” ].  There are some painful outakes at the end from this sequence!  One of the gang is shot and wounded.  She is later killed by another member of the gang.  They escape by either BMX or rollerblades down the outside of the building.  Chan and out strange policeman are hot on their tail using either a pair of handcuffs or a piece of pipe.

This is where we now discover that PC 1667 isn’t actually a policeman but someone who needs closure as well for a bad time in the past.  Jackie and our liar are now arrested and put in the cells.  Now the stupid comedy starts.  It’s very 1920s slapstick but even less subtle!  they have to break out to save the day as well as there is a small problem with his girlfriend and a very sensitive bomb that’s due to go off in 10 minutes.  This almost costs her life as well as destroying the headquarters building. They go from one crisis to another with a lot of destruction in their way. There is a massive fight sequence in a LEGO store for some reason.  Oh yes, sponsorship!

You know where this is going and it does.  There is a huge amount of set pieces in here and throughout the film from the standard fight scenes to one that involved a bus, a truck and 1,000s of bright yellow rubber ducks!

The gang, as well as their rich parents, are together and eventually the gang are all arrested or killed.

We end the film on a high where we discover what is the true reason why PC 1667 is there as well as a great marriage proposal in the Police headquarters!

It’s a hugely enjoyable film.  It isn’t a part of the original Police Story films apart form it has Police Story in it.  It is one for anybody who likes Jackie Chan and are looking for a good film.  The only problem is that the second act does drag from one clichéd scene to another.  This is made up by the explosions and other stupidity of the other two. 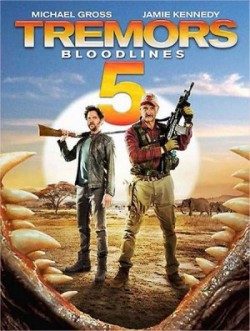 Finally, we have finished the Tremors series.  We did see parts 2-4 a while ago and this one makes the series complete.

We find Burt still alive and trying to earn a living off his dwindling fame.  He is making survivor training films as well as having a line of sauces.  He still is as nutty as every, possibly even more so.

The story does involve the discovery of a new type of Graboid.  A faster and smarter version.  We still have the ass-blaster and screechers but this one is new.  It was discovered in South Africa by an unlucky person who happens to be eaten by it.

Burt is filming a sequence for his training films a new cameraman turns up, Travis, who not only takes over shooting but also tries to make Burt famous again.  This time may be his greatest adventure yet.  It does involve South Africa and an outbreak at Graboids, as well as the other creatures that come from them.

Our hero signs on to kill the creature.  This plan is changed by our South African who wants to capture it.  We also meet an equally as nutty helicopter pilot.  he gives Burt a business bottle opener with his phone number on.  Could this be required later on kiddies?

We do have rubber arms being flung around as well as buckets of goo.  Not only that, Burt is captured, caged and undergoes some sort of rebirth.  Even more manic as there is a large weapon involved at the end!

We discover the person who hired Burt is a poacher doing it so he can save an egg and make a fortune.  He doesn’t last to the end of the film due to a bad case of death due to being eaten!

There is a sub plot going around involving a lady in very short shorts and a bow and arrow protecting her daughter.  Right down to an homage to the famous kitchen scene in Jurassic Park.  That and a very explosive Land Rover!

Our heroes get into some scrapes, find a huge amount of explosives and go out to discover the motherload.  The nest.  This brings our pilot back into play.  he just happens to have rockets that can strap onto his helicopter.  That was lucky!

An amazingly silly final, for now, chapter in the Burt saga and his fight against the Graboid menace.  There is a credit sequence so keep watching.  If you love any of the previous Tremor films then you will love this one.  Even if you haven’t give it a go.  Or even better start at the first and work your way through.