Two of the films that we saw on the weekend involved loin cloths and a psychotic turkey!  The other films have been reviewed somewhere else on this site by another member of Bad Movie Towers 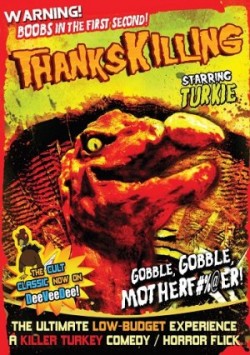 What can you say about a film that starts with boobies just after the very first thanksgiving feast.  Even the poster tells you that!

After that the boobie count plummets and the rest of this comedy horror goes on with nothing exciting happening.

That’s almost true but there is a sequence that involves two of our heroic stupid college kids having their way with each other.  It was all going well until our murderous turkey got involved and, after killing the boyfriend, finishes what he started.  All of that ending in the most comically bad horror screaming you can hear!

We do learn from a strangely inexplicably placed book, the only way to kill the demonic turkey involved burning at the stake and other bits that we don’t care to pick up from the dialogue… It was that bad!

There are 5 kids that are in teh typical horror setting.  Not only that the evil killer gets dumped in toxic waste and shot until it’s dead – or is it?  Let’s leave that answer alone apart from the sequel, Thankskilling 3 came out a couple of year later.

The main thing I can say to make you go out and get a copy is – It’s very short at just over an hour in length.  It does seem that it’s twice as long when you’re watching it. 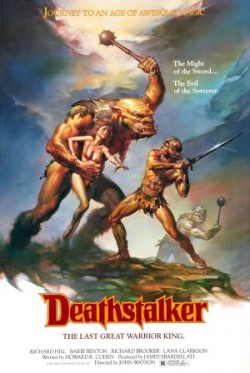 A sword and sorcery low budget film!  The only person of any note in the film is Lana Clarkson. Even she’s no better know for how & who killed her!

The film is basically a very very low budget take on Conan, with a sprinkling of Red Sonja and other such genre films of the 70s.

This was one of hte films that seemed to be trying to be one that was dirtier than it should have been. Involving half naked women and other ones in very skimpy costumes. It falled miserably as most of us were transfixed on the Poundland Coan. Not only for his costume but his amazing mullet!

We did enjoy the film.  It think it just sucked us in but we didn’t come away with anything more than remembering that there was glowing swords.  A ring or something was involved and some of the amazing hairstyles that were about in the early 1980s.