After Racist Batman we sat down to watch two films this week. 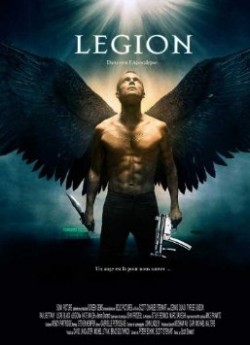 What can be said about this large budget Angel-fest of a movie? Firstly, why it made in the first place? Paul Bettany deserves better work!

The film is set in a diner in the middle of nowhere USA. the sky is miserable and nobody can contact the outside world. A standard cliché from the genre.  Not only that, the dialogue does seem to wander through genres.  From Horror to Thriller but with the occasional drifting into the full film noir dialogue.  All in a horror film as well.

The first thing we know is that someone called Michael is in this diner and some policemen get shot and killed in cold blood for no reason at all.  This is meant to be the “good angel”.  Sometimes they do drift downwards but not that quickly.

This then switches to the diner and then everyone has to tell everyone else, when they first meet, an extended back-story of where they were.  We also discover that our unmarried mother-to-be is almost ready to give birth.  Any time now maybe used to describe how far along she is.

It doesn’t go well for our unmarried, pregnant, waitress who gets called a huge string of rude names my a little old lady.  Just after this she turns into a monster and tries to kill everyone in the diner.  She does get one with a nasty neck wound but that’s all before her timely death.

This then kicks the film into a higher gear.  Well, occasionally it gets into a higher gear before it gets dragged down to something like a 50s Kitchen sink drama.  Lots of foreboding and talking about each other.  What the future will be.  How the angels will save the day.

Sometime during the film.  I’m not sure where as the film just seems to drag on forever is that an angel appears with a boot full of guns and enough ammunition to protect the diner from an army of some sort of mutant, end of the world, Zombies.

Around this time some of the people from the diner decide to flee to safety.  Yup, you maybe a bit ahead of me on this.  They drive towards what looks like a storm.  It is, until we see flies, bees and other flying critters start coming out of the heater vents of the car.  It then switches to some dubious CGI flies that fill the car and kill the people inside.

Now it’s night and we have to survive this so the prophecy will happen and the world will be saved from God ( or whoever is pulling the strings ) destroying the world.  It then kicks into a massive action film with our plucky gang trying to keep alive and fighting off the hordes of zombies.  Around now we see them driving away with our mother giving birth in the back of the car.  Also we have some angel-on-angel action.  Fighting to see which side wins and if humanity is doomed.

This end of level boss fight ends up with the heroic angel winning and they drive off into the sunrise knowing that humanity has been saved.  A scene very reminiscent of the ending of The Terminator.  Just change “God” to “Skynet” and you’ve almost got a semi-decent Terminator spin-off film.

It’s the sort of film that just makes you wonder why a lot.  The story isn’t that well done.  The dialogue stinks of some hack-biblical writer who have heard religious sounding words and then welds them into a script.  Badly welded at that!

We did learn some things from the film – 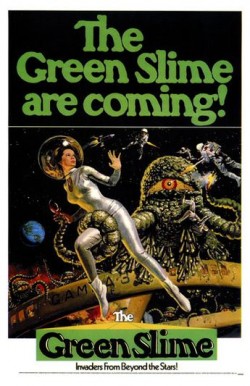 What can be said about this Japan / American co-productions. It’s a cross between woodenly over action and Gerry Anderson’s Z team doing the models. They have been to the local store and got all the washing up liquid bottles they can find for the space ships we see in the film.

It’s quite a simple story.  An asteroid is hurtling towards Earth – Something that we all thought was akin to a meatball.  A small group of astronauts are sent up to, basically, blow it out of the sky.

Strapping explosives to the comment, our brave men discover a pool of green snot bubbling away on the asteroid.  This then gets trapped on one of the suits.  Unluckily, nobody notices the green ooze of the suit before they blast off back to a handy space station.

We discover that the time to get to a safe area before the explosion goes off has been shortened.  This isn’t an issue for the crew of the rocket.  All they need to do is put more power and suffer the 100s of G’s that are caused.  This gives us one of the best sequences of the whole movie.  Amazing face acting for massive G-loads.  It’s fantastic and a master-class in the fine art of face acting.

The action now changes to the space station.  Our fearless leader ignores quarantine rules and wanders straight back onto the station.  Him and the rest of his men.  Even if we have forgotten about the smuggled ooze but what could go wrong with some strange biological contaminant and not going through any decontamination process… Let us think what could go wrong…

This is where the film loses its way and we have no idea what happens in the plot. This place is where it all starts ot go wrong and accusations will fly between the rivals.  That and the discovery of the monsters.  This is where the film starts to go down hill.  Mainly because what the monsters look like.  Well, I can describe them as tentacle penise monsters.  Other viewers thought they were more “Space Lobsters“.  In the John Zoidberg school of lobsterism.

We also discover that the monsters can’t be killed using the pew-pew, LASER, guns that only give them power as the monsters live off electricity!  What can they do.  Well, they can call for the Monitor Car.  A golf buggy with a large TV on the back of it.

There is a lot off deaths of people, the erroneous love triangle sub-plot [ Not included in the Japanese version and as such is quite a bit shorter than the version we watched] is sorted out and we leave the film with the survivors heading home after they self-destruct the space station.

The more it goes on, and after the monster appears then it just gets even more enjoyable.  The acting is what you would expect of the era.  The effects compared to something like 2001 are laughably naive.  The monsters are something to behold in their Godzilla like “man in a rubber suit” way but they do pull off a more of a phallic look than a scary killer monster running amok on a space station.