Just one film was watched this week.. Don’t ask why.

Revenge of Billy the Kid 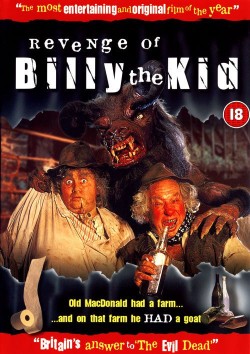 Well, it’s a strange one this one.

One that is a slow burner.  Well apart from someone farting themselves to death and an importune dumping in the dung heap and a little bit of loving of an outsider… Something that shouldn’t be allowed by the rest of the family.  Not only that, don’t let the clumsy one out with a shotgun as he may shoot himself in the foot and then bleed red colouring out of it.  Not only that we learn the best way of peeling potatoes is with a knife and randomly cutting off chunks.

Not only that, we discover the best way of stopping being woken up by a crowing chicken is a shotgun blast to the said animal…

From now on it just plods on. After we have the birth of the half goat, half human monstrosity, Billy, the story goes on and on. With a bit showing off the rubber masks – they are not half bad compared to some we have seen. animal mutilation and a, possible, killing of our mutant. With everything being blamed on poaches and not what we all expect it to e out Billy. hat will happen to the rest of the family? Will they all survive or will they all die apart from the only “normal” one. The daughter? At this moment in time, I don’t care as it is just dragging. It needs something to keep us interested apart from the Day for Night filter that seems to be used for 80% of the night shots.

AS times goes by, Billy gets bigger and bigger. His head seems to be more solid the older he gets. It must be a genetic thing about being half human half goat mutant. Now we’re into Act 3 and it’s not getting any better. Both the comedy and horror elements are running flatter than an Olympic gymnast.

Now the living poacher has made it back to the mainland and it seems that we now have the torch wielding mob going to the island and killing the monster. Will they or ignore the fact that they maybe shot as trespassers. I’m going for the torch wielding mob. It seems that her “boy from the mainland”, Lance, will be saving the day alone. It seems to involve a crossbow, flares and a chainsaw. That ater seeing the father being killed by the beat. Our hero bursts through the door and then runs over the dying man.

The fight was quick and pointless until the last couple of minutes of the film. That and a bad bit of cutting leaves us having the monster being doused in fuel and then blown up by a flare.

An acquired taste of a movie. It just doesn’t get going as fast as it should. Some of the comedy is funny but most of it just tends to be fart jokes and other ones along the same ilk. Something to be suffered than watched.