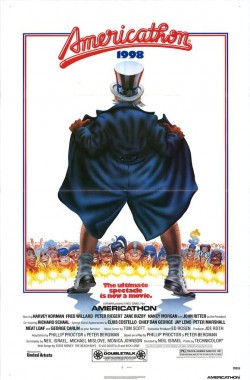 Okay here goes, this is my third attempt to convey the utter hideousness which is Americathon without it nudging into a 2000 plus word count. The trouble is where to start with this 1979 offering which has long been part of the ‘So Bad Its Good school’ of film thought mythology.

Little back story: This movie is often touted as being somehow prophetic because it had the luck to predict China’s rise to global superpower status all for the sake of a few cheap chuckles featuring kleptomaniac tourists a fact which has seen some people take it seriously as a work of satire. Well no, it’s hardly that lofty in its ambitions. Instead of satire we get Jewish-Arab Ninja squads (the two people having unified due to their love of ‘blondes with big asses’), a New Age President who is seemingly based on then US Governor Jerry Brown and Meatloaf performing a bull fighter routine with a car (which is by far the best part really) along the way the story meanders hither and dither but chucks so many subplots, cut scenes and outdated tedious gags into the maelstrom that you start to struggle to keep up with it all. You could almost miss Jay Leno’s legendry boxing scene which he still smarts over appearing in today. The basic plot is that America is bankrupt, bereft of oil reserves and everyone has to pootle around by various mean of cycle (a Hipsters dream world) the US Govt has loaned £400 billion from Native American business mogul Sam Birdwater to try to keep the country afloat but now Birdwater want’s his money back and the US might default. Hence the crazy scheme of hosting a talent show telephone to raise the required cash because whilst America might not have enough oil to drive their cars they can certainly still find the energy needed to power their TVs. The kooky president has an affair, his wife ends up the TV Executive hero, everyone ends up forgiving one another and finally Birdwater gets his money back by oddly giving a donation of the final required sum thus saving America from the reclamation and also rendering the point of the film (if it had one) null and void.

By the way in this film world the UK has been turned into a theme park to combat the same sort of slump which has befallen the USA seeing the Royal family turn to being the face of hot dogs and Number Ten converted into a rather seedy looking night club dubbed ‘Maggie’s Disco’ at which point we all agreed we’d quite like to have had a peek inside of that particular den of iniquity but sadly all we got was a ropey animation instead of neon lit sign over the door.

Oh it’s a topsy turvey kind of a world alright but the genuine laughs are few and far between and the films is overlong by a far margin. I ran the full gamut of emotions from joy on the prospect of seeing this dubious classic, sadness that it wasn’t quite what I’d been promised, rage for obvious reasons but ultimately satisfied that it offered enough chances to spot cameos and debate if the Beach Boys were still cool enough in 1979 to have supplied the opening theme music – I doubted it.

One of the other and similarly oft mentioned cameos from the world of pop is Elvis Costello who sings (briefly) an utterly forgettable track to a crowd. It has to be said that Elvis Costello appears to be having a far more jolly time of it all in this dire excuse of a film than when he cameoed in Austin Powers… maybe this is the movie which made him weary of such things? 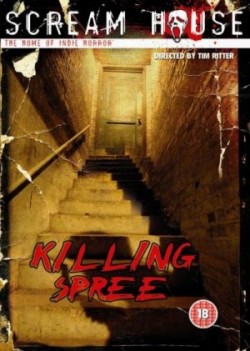 Killing Spree In which the improbably named Asbestos Felt proves that even C list horror movies can lower the bar so much for the level of acting skill required to have the cast almost limbo dance under it to get to the sets. The sets by the way are also worthy of star status in this, we had a lot of fun noticing the hastily cobbled together rooms and décor used to convince us that Mr Felt and his young wife lived in a small suburban house. Wobbling walls weren’t really the issue but the carpet which failed to reach the end walls and was wrinkled up having just been weighted down by flat pack furniture was near maddening by the end of the film.

The plot: Such as it is sees the over worked and easily stressed out 1980s Hippie looking Felt lose his mind in near record time, time was of the essence in this film so we don’t get a gradually slow build-up of tension to the first blood-letting but obviously the director wanted to get straight to the gore asap. Asbestos rummages around his wife’s diary and on reading it apparently sees confessions of many infidelities she’s been partaking in with all manner of odd job men in true ‘Reader’s Letters’ of Razzle manner. The best thing about the diary scenes is the lighting rig work which sees some ‘crew’ member hastily turn off the main lights to shine a red torch onto set illuminating the scene in what they probably hoped was an errie menacing glow but looks more like someone has nicked a bulb from a brothel. In the first diary sequence we see some actually pretty grotesque special effects of the wife’s giant lips enveloping those of her would be lover, by far the best FX of the whole film.

Our Asbestos goes rather Tonto with this information and decides to off the lot of them in order of their committing the offence. First to go is his old best friend (who he already hates) and his young cliché Quincey Punk girlfriend who looks like a ratty version of Toyah Wilcox and has a pet Iguana on her shoulder which magically manages to be facing a different angle with each shift from close up to wide shot. She gets dispatched off screen but her paper mache severed head makes several cameos from then on in, the best friend is duly done in and disposed of before the wife comes home. The next day Asbestos bemoaning his shitty life to a work colleague heads home and finds the diary again the red light is hurriedly flicked on and from here on in the film follows the logical conclusion that every time he picks up that book people are going to die in some amusing shoddy set up manner. What struck me through the film though was just how normal it seemed to be to everyone for this couple to be leaving smutty magazines laying around the house, those mags by the way are plot devices central to the ‘twist’ ending in true ‘Tales of the Bloody Well Expected’ manner.

The finale sees the dead rise and take revenge on Asbestos in no particular order. It ties up like a live action DC Comic and frankly whilst I might regret saying this I genuinely enjoyed the shoddy schlock horror fun on a budget being shown to me.

The final horror though was saved for last and is the mind-numbingly bad ‘Rapping’ performed by Mr Asbestos Felt as the credits role.