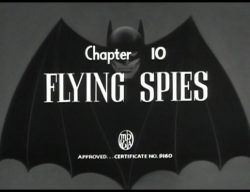 Last time we saw The Batman about to be crushed by a gangplank from a docked ship. How does he survive? Quite easily by the looks of it. just roll out of the way and everything is happy.

After that lucky escape The Batman and robin still have work to do. Their captured goon, Marshal, needs to be handed over to the police as well as raiding the Sphinx Club. On the other hand it maybe better to just leave them alone.

Marshal was given to the police in a nice subtle way. Thrown out of the Batmobile to roll onto the police station’s steps. It’s nice to see that The Batman cares about the people he has kidnapped. Sorry, arrested as he’s a secret government agent. At least he leaves a note to tell them why he’s been dumped on their doorstep.

Back to our evil, nefarious, Jap… What issues have they had. What has happened to The Batman. Is there a secret Batman organization that just keeps sending them. That would explain how they keep failing to kill him at the end of every episode.

Now with that confusion hanging over his head, our nefarious Jap has more news. This time it’s good! A new batch of Radium has been found by some of his organizations. The major piece for his atom dis-integrator. Will it be there in time or would it fall into the hands of the heroic Batman?

Back with The Batman, we discover that Miss Page is heading over as well as a coded message arrives from the government. This then starts an argument on why Bruce stood her up and what this Chuck White is doing with him! She does seem to be easily fooled into believing any ludicrous story that her boyfriend tells her without any comeback.

After Miss Page has left in a bit of a huff, Robin appears from the grandfather clock and tells Bruce that the message said that a large amount of Radium has been stolen and they should keep an eye out for missing radioactive material. Chick is going in to help get the radium back but with Plan 18 in effect the Japs will now get it by other means.

With Chuck delivered by “taxi” to the Sphinx Club all he has to do is wait until everyone turns up and he becomes a member of the gang. He then tries to pitch for a job but gets a different one helping the horde of evilness. That was lucky. That and a local taxi just happening to be just there for them. Off to the other club for Chuck to be introduced . What could go wrong in this one? Where is The Batman & Robin where you need them?

Our evil Jap has had a look at him via the standard, cliched, eyes in a painting gag. This convinces him that all he is is a lowly gangster. He warns others to be very careful of him and keep his eyes peeled just in case he does something wrong in that nights adventures. We do have people watching him to keep Chuck safe.

Now for Plan 18 and the radium. How will it be delivered. How will it be recovered. What will happen? Will The Batman come and help save the day? A small fight happens and Chuck escapes.

This then leads to the fight after the radium has been dispatched from the plane. The Batman does manage to escape but right up to the point where a tire is shot out and he goes to a fiery death over a cliff in a fireball!

How will he survive this? Tune in next time to find out!