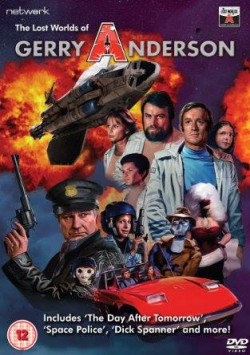 Oh my Lord, the guilt I felt on bringing the crap filmic offering to the Bad Film Night last night still haunts me today and probably explains why I feel sick as a sickly dog. Its the guilt, must be, no other way to explain it and it’s what I deserve for forcing us to watch two Gerry Anderson feature length pilots which were justly ignored by the TV studios.

The first one, 1975’s ‘The Day After Tomorrow‘ seemed going by the trailers as if it would be full of campy, kitsch 1970s period space fun but was in actuality as dull as ditch water, I even felt sorry for Brian Blessed whom as a rule I loathe but seeing him robbed of his one (and in my opinion only) asset, a loud booming shouting voice, and reduced to mumbling on pseudo-science and playing with a slide rule whilst padding about the nice looking set like a caged lion made me feel for him. ‘The Day After Tomorrow’ is hailed as a classic and criminally forgotten work by Gerry Anderson by his diehard fans and justly ignored and forgettable by the rest of us. One of the main issues take with it is that it was a poor knock off of ‘Lost in Space’ which the concept really does seem to be but just robbed of any fun and adventure and a funny robot. This is Anderson at his most earnest and the voice over narration informs us of a future where Earth has squandered its natural resources so must look to the stars for humanities survival. So of course sending a family unit (and Brian Blessed) into space in an experimental space craft is the answer. The voice over starts to feel more and more like a padding tool, used to break up the long silences and inaction of the scenes in which we soon lost interest but noted that the cast were pretty much just repeating what we’d already heard from the narrator.

By far the greatest thing this pilot has going for it is the theme music which is a whooping example of the art form in the mid-1970s, all proto disco funk. But its also blessed with some very decent sets in the opening scenes in particular we all had to agree that the quality of the mapping and scenery matched that being done on a bigger budget in films.

Next up was 1983s ‘Space Police‘ which had the dubious episode title of ‘Star Laws’ and was the original pilot (one of many) for what would eventually become the short lived ‘Space Precinct’. Anderson production stalwart Shane Rimmer (not just the voice of Scott Tracy but also Dick Spanner and wrote screenplays for Gerry Anderson’s many series. I rather like Shane Rimmer, maybe because I have fond memories of Dick Spanner (similarly maligned late Anderson series) but also because he isn’t blessed with what you could call Hollywood good looks, a face which is lived in and a body gone to seed. In this respect he’s perfect for the role of an ageing Earth cop nearing retirement and posted to an outer planet’s small time police unit and he’s convincing enough an actor when he’s playing it as Hill Street Blues styled Police Procedural in space during the debriefing scenes but less so when in engaged with any action.

The show feels so very 1980s from the cyborg character having her own set of inbuilt Venetian blind sunglasses to the nightclub in which criminal mastermind Mr Big (A Jabba the Hutt rip off with chubby phallic looking fingers) conducts his business, looking like the haunt of some city boy spiv bankers.

The whole things an odd unconvincing mix of live action cast, Thunderbird styled puppetry and stop motion models which gave me a headache and never really gels as it should, the failures of the method becoming more apparent when a character is reduced to a puppet because the only set they built for the scene wasn’t to a human actor’s scale. Anderson & Burr reworked this original pilot several times editing out the original cast and inserting scenes with younger actors and a few versions exist. The last pilot made in the early 1990s which starred Chloe Arnett who would go onto to star in Crime Traveller and Red Dwarf. This finally got picked up mainly on the back of the whole Thunderbird/Anderson revival craze of the 1990s and a series was commissioned… but only one.. thankfully.

No wonder I feel the need to placate everyone by taking a bottle of cheap plonk along with me!