It wasn’t a Bad Movie Night at Bad Movie Towers this week.  That only happens on a Friday.  As it was Sunday it was decided to do a “Good, Bad & Ugly” film night.  Today’s link was Animation and Live action. 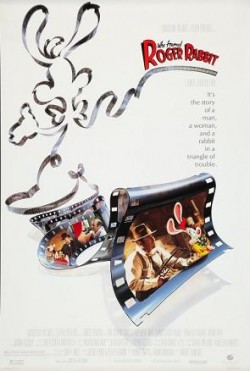 The first on the bill was the “Good”.  That being the 1988 classic that involved a rabbit called Roger and his wife Jessica.

What we realised whilst watching it is how adult the humour was at points.  The running over of a character with a  steamroller or dropping a safe on a human!  Very dark and worrying as it was advertised as a children’s film.  Not only that, we see children smoking.  As well as not too subtle innuendo aimed squarely at the parents in the audience.

It is one of the, if not the, greatest mix of both live action and animation in as seamless way possible.  They mostly succeed but watching it at blu-ray resolution you do spot the bits that just sightly fail.  You do feel that some of the fighting is done in a way to make the whole thing believable as you are living with cartoon characters so physics sometimes takes a back seat for all the characters.

It’s amazing what characters they got to use.  From most of the cast of Fantasia, Dumbo and the Crows.  The list of who we saw from the Golden Age of Animation goes on and on.  We lost count as we couldn’t remember names quickly enough. 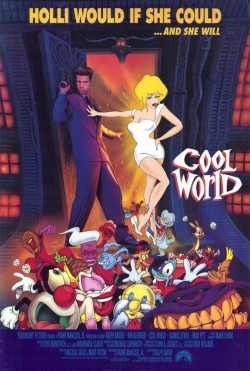 Our second was one form 1992.  An “Adult” version of Who Framed Roger Rabbit.  It fails on soo many levels.  Budget, issues with eye-lines, where the animated parts would be matted in.  Limbs changing from colour to lack and white.  A strange mix of “Heavy Metal-esque” animation style.  It does seem as well, most of the money went on the great backgrounds and the sets are a little wobbly at times as they only seem to be made out of ¼inch plywood!

What we actually get is a totally dis-jointed mess.  There isn’t any major reason why Brad Pitt ends up in Cool World.  Why he’s wearing a very 80s take on the classic 40s zoot-suit.  Why there is a mad toon scientist running around in the real world.

Why does Gabriel Byrne & Kim Basinger keep trying to change into scary clowns.  Why is there a leak of dimensions – We think that was down to a very sperm-like contraption that can stop the dimension shifting.

It was the narrative elements of the film that let it down the most.  And there was quite a lot of areas that it was a let-down.  The eye lines of, especially Brad, the human characters was all over the place.  They lack of shading and camera movements that made Roger Rabbit so great was lost due to the much lower budget that this film must have had.  It was trying a bit too hard to be an adult rated Roger Rabbit but failed due to many, many, reasons.  When Brad puts his arm around his toon-girlfriend it is quite random as well as his attempt of seductive massage is cringely bad acting as well as animation.  Not only that, she seems to change hight at random so she fits on screen.

When Who Framed Roger Rabbit managed to make the interaction as well as just placing cartoon characters in the real world.  You believed they where there.  In this film.  It was just jarringly unbalanced.

If you are a fan of any of the main, human, actors then this is for the completionist only.  It is also great to see what could have been if it had money.  It did have good ideas but the script needed quite a bit more work at the start of the film to explain what happened to Brad’s character that dragged him in. 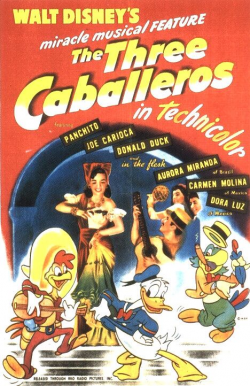 What can I say.  It involves Donald Duck chasing after human females to, possibly, mate with.  He does seem to be all over some of the singing stars.  Not in a nice sort of way.  More in a stalkerish way.

It is a blatant propaganda film from Disney to make American buy more South American goods – but only from the correct countries ‘tho!  This is part of the film’s charm looking back at how the USA used to deal with Latin America.

Lots of song and dance numbers using famous Mexican & Brazilian singers of the era.  There are some great sequences where they may merged the live action to the animation.  Not only that, there is also a “building” around them as well to interact with.  It does seem that this also suffers from lack of interaction between the two elements but our Three Caballeros do get on very well together and do some great song and dance numbers.  With a, possible, nod to Fantasia there is a sequence that seems  just to show the music as waveforms and musical instruments.

Song of the South 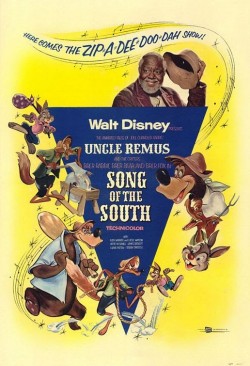 The plan was to only see the three films mentioned above but then this film was pulled out.  It has had quite a chequered history.  Mainly down to the perceived racism.  I think this is a harsh modern look at the film.  The slaves are shown in a very good light.  Almost on a par with the plantation owners.  This was one of the comments made against the film.

It seems to follow a little boy who is dressed in frills and shouldn’t look out of place in an 16th century Holbein painting.  Dressed like little Lord Fauntleroy.  Not only that, he sneaked out to hear the stories of Br’er Rabbit and what he got up to.

The thing for this film is all we tend to know, and see, from the film is the Oscar winning Zip-a-Dee-Doo-Dah.

The Animation is quite sparse in the film.  I expected more.  It may just because we’ve seen the famous song so often we just assumed that this was the way the rest of the film went.  It doesn’t.  It seems to be a story of a boy who was left with his mother at the plantation while his father leaves them.  There is also a grandmother mentioned but she seems to be the evil type of grandmother!

That as well as being picked on by the local bullies, a dog that he was given by a girl and strange sage-like advice from Uncle Remus.  Parts of the story that I wasn’t aware of.  I just thought it was musical numbers with animated characters.  It’s more of a drama with some musical numbers thrown in to pad it to the correct length.